Leader of the Heavenly Kings;

The final Metzelei, Geweih is their unofficial leader. He is a massive Invader and his body generates heat equal to that of the sun that his presence on a planet is enough to cause temperatures to rise worldwide. If he is in the mood, he can also destroy a planet with his own body in a single day.

He believes in the survival of the fittest, as being extremely strong himself, he sees those weaker than him as fodder to be used for his own purposes. He doesn't have a high view of humanity as he sees them as those who fight and die in vain trying to prove who is the strongest, considering himself to be the strongest and that no one can best him.

Though he generally works alone due to the danger he would cause his allies, one of his fellow Metzelei, Bloom, idolizes and treats him with respect. He had visited Bloom's planet, which was teetering on the brink of a new ice age when his presence warmed it back up to normal.

He has a younger sister, Eis Monstrum, but the two are not on good terms with each other due to their conflicting personalities, with Eis considering him to be too moralistic.

Geweih is briefly mentioned in "Material Affection" where Franke tells Annette that he is almost ready for deployment.

He makes his first appearance in "United Front the 18th" where he pays a visit to Earth. His presence is enough that it causes three different armies to fight him, but his immense heat easily overwhelms any opponent that tried to battle him. He melts down part of the planet, but eventually decides to make it a new home for the Invaders and contacts Schwarz and Bloom, entrusting the two to safeguard their new land while he sets off to destroy other planets.

He later oversees Schwarz's awakening, commenting that she must eat to survive, and doesn't appear to show remorse if she were to die during the process. The awakening is a success.

Geweih later accompanies Biene Goldenes when she decides to visit Earth in search for gold. He mulls over the thought that the humans will try to defend their land, but will inevitably fail.

Geweih eventually learns that her sister had dropped on Earth for a visit. He confronts her on the planet, with both brother and sister nullifying each other's auras. Taking note of her newfound obsession with humans, he reminds her that as a Pentagram member, she can't selfishly decide Earth's fate and departs at the same time with her. 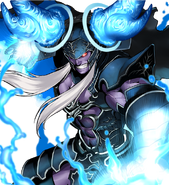 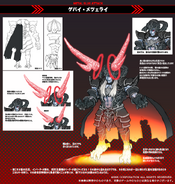