The Giant Copter is a massive weapon created by Midori, exclusive to Metal Slug Attack. It first made its debut in the game's event titled 'Try Line 10th', where the boss can also become a playable unit.

"This new Regular Army heavy weaponry was created by an incredibly talented young engineer. Still just a prototype, it is driven by the engineer itself. It comes with a safeguard that makes it change into a second form and withdraw from battle should the passenger be in any danger."

In Metal Slug Attack's event, this boss is fought at the last stage. It consists of two components, a Slug Copter component containing Midori, and a massive mobile vehicle as the other. The boss' attacks come from the mobile vehicle, where Midori can operate it to extend its arms to punch enemies at various ranges. As its special attack, Midori launches numerous gigantic floating balls reminiscent of her original and Christmas variants' attack, which delete incoming projectiles and deal massive damage to anything they touch.

As a playable unit, the Giant Copter is also fitted with self-repair technology to allow Midori to continue the fight as long as it is not critically damaged. If destroyed, Midori attempts to escape from the Slug Copter, barely doing so by accidentally falling off the seat and hanging on for dear life on the Slug Copter's tail. 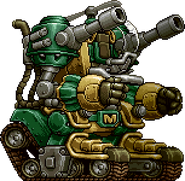 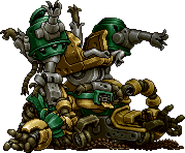 Midori attempting to escape inside the Slug Copter

Midori hanging on the Slug Copter