The oldest of the three Goldenes sisters, Krieger takes on the form of an Amazonian harpy. Like Biene, Krieger is often accompanied by followers, which for her consists of Bird Gladiators; Mummy Warrior-like Invaders who are fully loyal and trained by her.

She enjoys fighting the enemy, using her speed and sharp talons and wings to decimate the enemy's front lines. She enjoys a good relationship with her younger sisters Biene and Drache. While she is normally cold to non-family members, she does occasionally show respect to strong and/or trained opponents. Like her sisters, she is obsessed with gold.

First appearing in "Task Force 21st", Krieger learns of gold on Earth and makes her way there with a Bird Gladiator. Upon arrival, she finds Dragunov and Caroline and fights them for the gold, evading the GIP-03α Valkyrie's attacks while capturing Caroline in the process. Due to the unusual willpower exhibited by Dragunov, she treats her as a fellow warrior and declares to give half of the gold as a sign of respect. While digging the gold, she then discovers that it was none other than her younger sister Drache. After introducing her, she returns Dragunov's comment on winning in their next encounter before complimenting her younger sister. 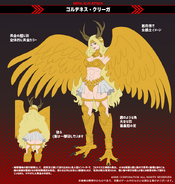