Grace is a new character introduced in Metal Slug Attack.

Another full-blooded vampire, Grace initially comes off as somewhat friendly and carefree. Behind the scenes, she is manipulative and cruel, ruling her subordinates through fear and does not hesitate to kill them for failure. She has a desire to be the new queen of the vampires by overthrowing Agalia.

In battle, she uses launches bat-like projectiles from afar and can create pillars of blood to sap the enemy's strength, converting it into strength for her own attacks. If the battle becomes too dangerous for her, Grace stumbles and catches her breath before transforming into a bat and fleeing the scene.

First appearing in "United Front the 33rd", Grace orders her subordinates to cause havoc at several towns. This gets Agalia's attention, who sends Sharl to investigate on her behalf. Surprised that Sharl had been sent, Grace initially plays off as an innocent vampire until Sharl spots her killing another vampire in cold blood for what she perceived as failure. Before Sharl could attack, Grace orders her vampires to restrain the enforcer, upon which she leaves the scene, thinking about her aspirations of becoming the new vampire queen. 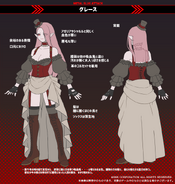 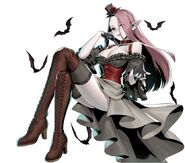