Growl is a young child, and according to rumors, was a passenger of a large ship that mysteriously sunk 10 years ago and was never found. Growl appears to be the only survivor, and was shipwrecked on a nearby island populated by tigers. The tigers decided to raise Growl as if he was one of their own, with one of them personally taking care of him and serves as his companion. The two share a strong bond, as they head into battle together and Growl also appears to have created some treats for it. Growl learned to communicate with the tigers in the process.

During an expedition, the Regular Army discovered Growl on the island and recruited him alongside his tiger companion. Since he had never communicated with other humans before, the Regular Army is also teaching him human language. Though unused to it, he is slowly learning, while his tiger companion mastered the weapons system given to it; it is armed with vulcan cannons, rocket launchers and a mine dispenser. If Growl becomes severely injured in battle, the tiger will immediately retreat to protect him.

First appearing in "United Front the 20th", Growl is assigned under Fio Germi for the operation. He is aware of the mission he is going to undertake, to defeat the Martians, and collect the "shinies" (United Coins). Midori soon points out that Growl is serving Fio because Marco is confident in her traits, in which she mistakes it as physical and gets into a panic. Growl seems to get bored and dashes off to the battlefield, where he runs into Marty and Tank. Growl challenges them, and the two Martians accept.

Growl defeats the two Martians, and they leave after they note that he also wants to protect the Earth and its environment. They bid farewell to him, and Growl returns to base and is found by Midori. When he simply states "shinies", Midori mistakes it as him wanting to trade in his acquired coins, but then he points a finger at her while stating the same phrase again, suggesting he wants to be with her. 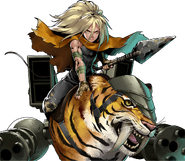 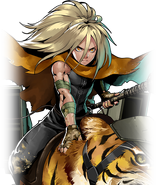 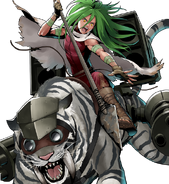 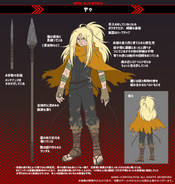 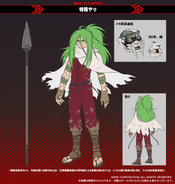