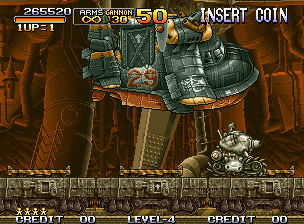 The Hairbuster Riberts is the boss of Mission 2 from Metal Slug: Super Vehicle-001. It also appears as a mini-boss in the Final Mission of Metal Slug 3, and as the second boss of Metal Slug Mobile 3.

The Hairbuster Riberts is a prototype heavy bomber created by the Rebel Army and is equipped with several forms of armaments, such as guided missiles and bouncing bombs, making it a versatile weapons platform capable of quickly adjusting to the situation. Over a hundred of these units were produced, all in their testing phase. General Morden attempted to escape from the Regular Army troops in Ronbertburg City on board a Riberts, but it was shot down by the Peregrine Falcons Squad. Unfortunately, Morden still escaped, caught in mid-air by a Flying Tara.

The players fight the Hairbuster Riberts on train wagons, with it flying at the same speed as the train. The wagons itself has three lifts that individually rise and lower. The flashing light below each lift flash to signify that the respective lift is about to rise up.

The Hairbuster Ribert's main attack method is to launch propelled missiles from the hidden mechanical arm, which have a number of patterns, such as going straightforward or making loops, from the bottom. It will also fly to the top-right corner of the screen, where it will drop a large amount of bombs that bounce on the train randomly, making them a little difficult to dodge. There is a retractable cabin located at its side from which a Rebel soldier will appear in a turret that fires homing missiles. After the Riberts sustains a high amount of damage, General Morden himself will appear at the cabin, firing rockets from his bazooka constantly.

The Hairbuster Riberts makes an appearance in Metal Slug 3's final mission as the first mini-boss. The battle takes place during a flying segment, which makes dodging the Riberts' attacks somewhat easier, but it also makes returning fire somewhat harder. In addition, Morden is replaced by Allen O'Neil, who will use his trademark attacks instead: throwing grenades when the player is below the craft, firing his M60 when the player is at Allen's level, and using his knife when the player gets too close.

The Hairbuster Riberts appears as the second boss. It is piloted by Corporal Vasser Gutenschiff (ヴァッサー・グーテンシッフ). Unique to this game is that the homing missiles now explode in the middle of the screen with the area of effect applied to the entire floor.[1]

The Hairbuster Riberts was introduced in the 1.24.0 update. It costs 400 medals, the same cost as the Hi-Do. It costs 600 AP to deploy, which makes it tied with the Metal Rear. However, its movement speed is very fast, making it the fastest deployable boss unit in the game.

It has two attacks. Its long range is firing a missile from below its body. Its special is randomly deploying either a Rebel with a missile launcher, Allen O'Neil with his grenades, or Donald Morden with his bazooka.

The Hairbuster Riberts was originally introduced as a Medal/VIP Crank unit. Nowadays it can be obtained via Battle Monthly Reward, specific Cranks, or by the Shops. Its AP cost is reduced to 500 (400 on platinum). It' new ability is to do a suicide attack when destroyed (requires Skill 2) which does a large deal of damage on a wide area. New variants are introduced.