No information
Halle is a new character introduced in Metal Slug Attack.

Halle is an amateur radio operator who likes to explore the unknown. One of these excursions eventually brought her with a Mars People Pocket, which she bonded with. She admires the Martians due to the rumors she heard. Unlike the rest of the human associates, Halle has trouble understanding Martian language. The device on her back serves as both a portable radio system and Martian translator, although it does somewhat poorly for the latter function.

Should her life be threatened, Pocket will call the Rugname to quickly move her away from the battlefield.

First appearing in "Encounter of Unknown", she recalls meeting the Mars People Pocket and joining the Martian Army. She is later woken up by Clone Abby, who leads her to the Professor. She is given her first task, which is to gather information on a new Cabracan model being built by the Rebel Army. Clone Abby accompanies her, though the Mars People Pocket stays behind to speak with the Professor.

During the mission, the two are caught by Beatriz, who attempts to use the Cabracan on them, but Pocket calls in the Rugname and annihilates it. Halle and Pocket communicate, and the latter believes that she understands what it is saying, only to be dismayed when she fails to understand its last sentence.

Sometime later, Halle is contacted by Leone to help find a mysterious Invader who is lost on Earth, believing that it would help get the Invader on her tank off. Their attempt to search for the Invader is interrupted by Olga and Dion. The Rebels find the Invader first, but it flees upon sensing Leone and Halle approach. As Olga wishes to know why Leone had joined the Space Army, her impulsiveness prompts her to accuse Pocket of intimidating her. Before she could do anything, the Rugname comes and picks up Leone, Halle and Pocke.

First appearing in "Little Song", Halle continues her search for the unknown by embarking on the Cursed Island. She soon encounters a Mars People Pocket, who had snuck into a Martian operation and was left behind by accident. Despite the initial tension, she is able to communicate and bond with it. Halle explains the concept of friendship and the rumors of the island to Pocket, and they continue to explore the island. Eventually, they hear something coming and run to shelter, only to flee when Aileen surprises them, mistaking her as a monster.

The pair are then attacked by a ghost pirate, who Pocket defeats. Halle expresses her gratitude to it and dresses its wounds. Later on, they are attacked by a Skull Hermit that Elysion sent to scour the island for living beings. Halle sacrifices herself saving Pocket, fairly content with her death since she fulfilled her dream. However, she soon snaps back to reality, wondering how she survived. Pocket explains to her that their king has granted her power, and they defeat the Skull Hermit.

When the Rugname is prevented from landing from the island, Halle and Pocket investigate and find Aileen's band of pirates fighting Elysion's group. A Ghost Shiee soon arrives to provide backup, though it is destroyed thanks to Rootmars' power. The two promise to see each other in the future, though Rootmars brings her onto the Rugname, having seen her selfless sacrifice for Pocket. She is immediately overtaken with the massive amount of Mars People on the Rugname as she goes around to explore. 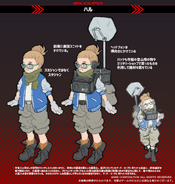