Harriot is an experienced soldier in the Rebel Army, who was tasked by Abigail to capture defectors; in her case, the Professor, Percier and Ariadna. However, she was caught during her mission. Percier, who appeared to recognize/remember her, promised her that if she joined the Martians, she would promise her three meals and nap time. Harriot accepted the deal and began working with the Martians. She affectionately calls Percier "Per".

She is rather laid-back and prefers letting others do her work, though she is a competent soldier. During her time in the Rebel Army she would charm others into doing the work for her. She is terrified of Abigail, knowing full well that she outmatches her and her response to dealing with traitors.

In battle, she operates the Mars Sweeper, a piece of equipment that is made from similar material by the Rebel Army. She tosses space debris to attack her enemies, and can also combine it with poisonous gas to weaken her enemies. The gas was created by Percier. When she is not in battle, she simply collects space debris that litters Earth's orbit. If the Sweeper becomes critically damaged, she'll call in a UFO to pick her up before the suit melts on itself.

First appearing in "Mars Sweeper", Harriot is seen operating her Mars Sweeper to collect space debris. She attempts to charm the two Mars People Cadres accompanying her into doing the work for her, but is unsuccessful. When the Cadres express their intention to return the junk to Earth, Harriot is terrified as the Rebel Army has considered her a traitor, and that Abigail would kill her for treason.

On Earth, Harriot feverishly apologizes to Abigail, before Navy challenges her with the Scrap Tower. Harriot easily destroys the Scrap Tower with her poisonous gas, but Abigail ends their fight, having grown bored of it. Harriot then returns to beg for mercy. Abigail then realizes that Harriot would make the perfect double agent due to her carefree personality, and reinstates her as a spy. She is initially unsure if she is up for the job, not wanting to disappoint Abigail a second time, but is reassured by her that she could do whatever she wanted with the Martians until she needed her services. Harriot then returns to space with the Mars Sweeper.

While settling in on her role as a double agent, the Professor returns from his hiatus and has her take Claris on a visit to Earth. Harriot finds herself exasperated by Claris' child-like behavior despite her appearance. When Claris' curiosity gets the best of her and she goes missing, Harriot panics as she tries to find her, knowing the twins would scold her. She finds Claris in some ruins just as the alien finishes up a fight against Shizuka, apparently unscathed. Harriot is relieved to see that she is safe and after Claris explains why she went off, Harriot tells her not to do so in the future before the pair return to space. 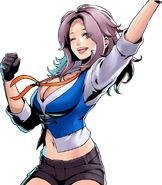 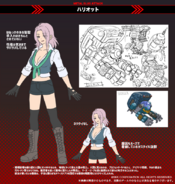