Hunting
Heidern is the leader of the Ikari Warriors Team. He marks the official debut in Metal Slug Defense.

Heidern is the commander of the Ikari Warriors, and issues orders to his adopted daughter. Leona and his best soldiers: Clark, Whip, and Ralf. He is also known as the General of the Soldiers of Fortune. After losing his family, Heidern creates the Ikari Warriors, His own Mercenary Unit. He rescues Leona from a raided town, and after seeing her capacities, decides to adopt her as his daughter. He enters many fighting tournaments along with his units, Ralf and Clark; sometime later he recruits Whip. He has a cold personality due to the loss of his family and his eye; He is an experienced strategist, especially when trying to stop an important threat.

Heidern in King Of Fighters 2001

Artwork of Heidern in KOF '95 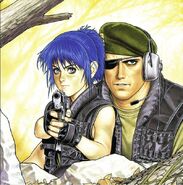 Heidern in the POW list from Metal Slug Defense

This article is a stub. You can help Metal Slug Wiki by expanding it.
Community content is available under CC-BY-SA unless otherwise noted.