The Hero is the main protagonist of Metal Slug: 1st Mission.

The Hero is a member of the PF Squad sent to attack the Rebel Army's Phantom Squad and defeat Hilde Garn. Although not named, the Hero bears an obvious resemblance to Marco Rossi in both his sprites and official art. After clearing the game once, a Heroine can be selected after starting over or selecting S-Continue. She also is unnamed but appears to a be a mix of Fio and Eri. 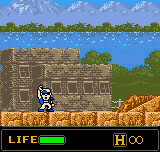 The Hero in the French manual of 1st Mission.