Howell is a new character introduced in Metal Slug Attack.

Howell is a tall man wearing a special suit with a surgeon's robe, hat and mask. He serves as a both a medic and a commander for the Regular Army and is known for not letting anyone die under his watch, being able to discern the severity of wounds and fixing them up extremely quickly. He is solely devoted to supporting his allies, even heading to the front lines to collect his patients despite the danger involved. This selflessness in turn increases the morale of the soldiers under his command. He does not tolerate anyone who interferes with his operations. Naturally as a doctor, he also promotes a healthy diet.

He supports his allies on the battlefield by deploying two drones - a green and red drone. The green drone targets allies furthest from the front lines and heals them, while the red one targets allies in the front and strengthens them. He is armed with an artificial muscle whip and a pistol for self-defense if the need arrives.

Upon learning of the Metal Device Project, which served to strengthen the human body, Howell offered his services to Marco Rossi in return for participation in the project, as it compliments his medical skills.

First appearing in "Perfect Doctor", Howell is overseeing a battle against the Rebel Army. His treatments allow the soldiers under his command to continue fighting against the Blaze Brigade despite being woefully outmatched, but he makes the decision to call for reinforcements. The brigade soon confronts him, but he simply dismisses Grazia as an idiot and continues operating on his soldiers. The reinforcements eventually arrive in the form of Trevor Spacey, Rumi Aikawa and an unaffiliated third party. Due to Howell's impeccable medical skills, the Blaze Brigade fails to inflict a single casualty upon his men while wasting nearly all of their ammo in the process. He easily puts Grazia in her place, forcing the Blaze Brigade to withdraw. Before Howell can leave, he is informed of a battle with the Ptolemaic Army and orders Trevor and Rumi to accompany him to assess the situation.

Howell later ropes Trevor and Fio to work with him during Valentine's Day to quell a chocolate riot caused by the Iron Fortress. 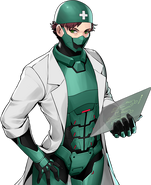 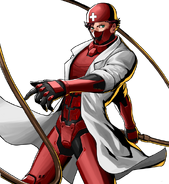 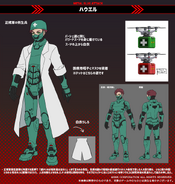