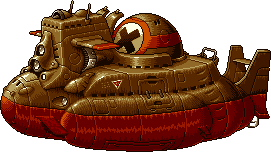 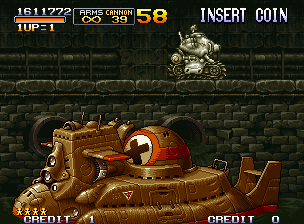 War is always a dirty business, but who would have ever thought you would find yourself in a naval battle while in a sewer?

The Hozmi is a nuclear-powered submarine, designed for naval battles. It is equipped with a powerful electric cannons with long range. It is unknown since when they were able to create such weapons, but since in this game they have relations with the Martians, it is possible that the Hozmi could be constructed with alien technology. In fact Martians can be found in small booths overlooking the construction of other Hozmi-class vessels.

Regardless of its origins, it's still no match for good old fashioned Peregrine Falcon violence. After the ship is destroyed, the crew will escape from submarine by jumping into the sewage water, adding insult to injury.

The fight against Hozmi is similar to the fight with Tani Oh in which the boss is placed below the player's floor. The Hozmi's rotating ball has several attacks.

Once the Hozmi is destroyed, the main cannon is popped out and the submarine sinks. Various Rebels are seen fleeing and swimming on the sewer-infested waters.