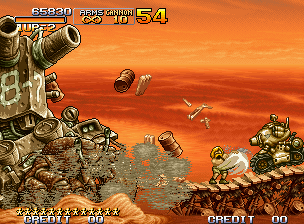 The Huge Hermit is the first boss from Metal Slug 3.

Originally a hermit crab on Pallas Island before it grew to a huge size due to radiation, the Huge Hermit is one of the mutated creatures born from the nuclear test on Pallas Island. The Rebels later captured the gigantic crab and gave it a hollowed out Denturion tank to use as a shell, allowing the crab to (somehow) operate its still-functional turrets.

The players have to keep moving right while shooting at the boss. The Huge Hermit will attack by shooting two fireballs from the tank, while also trying to destroy the bridge. After taking enough damage, it will reveal a large cannon, which fires large shells that can destroy parts of the bridge. Various POWs walk on the screen one by one from the right side of the bridge.

If the player took the Borobune Slug route (through the swamp), they will face the Huge Hermit with an SV-001 Type-R that faces backwards, which is the easier way. However, if taken the other routes (the Slug Mariner or the sunken ship), they will encounter and fight the crab with a Slugnoid Type-R with invert-controlled Vulcan cannons and fat Iron Lizards. While the player receives twice the firepower with the Slugnoid, they have to take care and avoid getting hit or lose a Vulcan per hit.

The Huge Hermit appears as a boss. In the early stages that it appears in, it loses its ability to shoot either the fireballs or the cannon but keeps its ability to do the rushing claw attack. The other version that appears in the extra world of MSD in the 1.36 patch can use the fireball cannons, but it can't rush forward. In the Hermit Boss fight, it will destroy parts of the dock, instantly killing anything it touches. If it gets to the player's base, the base is instantly destroyed.

The Mini Hermit from Metal Slug Defense returns as a Rare Unit. The Huge Hermit makes its playable debut in the "Mutation War" Extra Ops. Unlike its smaller version, the Huge Hermit is able to use both its fireballs and cannons. By unlocking the appropriate skill, it can attack and move at the same time.

In Another Story, it is revealed that the Huge Hermit was an individual creature who adorned the tank as its own shell. Esther was able to control the Huge Hermit, but it was eventually captured and re-purposed by the Rebel Army.

The Huge Hermit appears as an Uber Rare Cat as part of a collaboration between Metal Slug Defense and Battle Cats.