Humphrey is a new character introduced in Metal Slug Attack.

Humphrey is an elite soldier assigned to the Special Assault Force that serves Dragunov. He used to be a member of the Red Goblin Society before it was destroyed by Ptolemaios. He rides an air board to skillfully dodge enemy attacks and tease his enemies with. The hoverboard is armed with two cannons. The engine also serves as an air and flame propeller, generating massive gusts of wind and jets of fire respectively.

As a result of witnessing the society's destruction, Humphrey found himself afraid for the first time. He tries his best not to get scared, and dislikes being tied down by orders that could get him killed.

First appearing in "Freedom", Humphrey was one of the many Red Goblin society members present when Ptolemaios arrived and destroyed it. A fellow member attempted to convince him to shoot Ptolemaios while he was off-guard, but he shoots and kills the member out of fear.

He eventually finds his way to the Ptolemaic Army, where Dragunov sends Humphrey to attack the Rebel Army so the rest of the soldiers could scavenge for materials, stating that his participation would be necessary to ensure it was successful. Humphrey stumbles into Beatriz and Vicky by chance, where they send a Crablops Type-F-Lower on him. He easily evades its attacks, but ends up getting caught off-guard by a surprise attack and gets pinned by its leg.

With the operation a success, Dragunov finds Humphrey lying about and orders him to stay put for the medics to arrive before he is allowed to leave. Humphrey reluctantly complies with the order. Commenting on the situation he's in, he recalls Red's words and hopes to see him again. 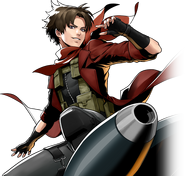 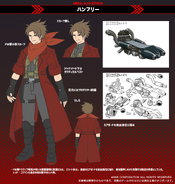