No information
Ichima is a new unit introduced in Metal Slug Attack.

Ichima is a puppeteer that came from the same village as Yoshino, Jin and Shizuka. Despite her young appearance, she is quite old - what manages to keep her young is not known. After the destruction of the village, Ichima traveled around the world and met the Red Goblin, joining his cause. She is good friends with Hisui.

Due to her small size, Ichima travels around in a puppet she manipulates by herself. The puppet primarily attacks with its fists, though it can also toss boulders if needed.

First appearing in "United Front the 5th", Ichima accompanies Red as they head towards a Rebel Army base as a Dai-Manji flies over them. Due to the insignia on the craft, she believes it to be a Rebel Army weapon, though Red knows otherwise. When Red authorizes the mission, Ichima is surprised with the amount of volunteers that arrived to help. After the operation, she believes the Rebel Army soldiers were weak, though Red corrects her.

Ichima continued to follow the Red Goblin, intensifying her combat skills due to her partner's rigorous training.

She soon follows a group of ronin, although she ends up getting detected by Ouka. She informs them that they should abandon their path of vengeance and ally with Red, but the group dismisses her claims as absurd. She continues to follow the group from afar and watches Kagura, who is inside the Crusty Legs, get injured by Bloom Metzelei. Appearing once more, she reminds them of her fortune. Ouka believes that she had lured them into a trap, but Keisetsu stops her from acting reckless; Ichima is pleased that they can cover each others' weaknesses, and teleports all of them to safety. Away from the base, Kagura informs her that they will take her advice.

When Damian accidentally falls into a land of hatred, Ichima ominously warns him that he would die. Damian, refusing to die, awakens his inner powers and destroys the undead army before him. Ichima survives the attack and warns him that the darkness would consume him before leaving.

She appears to Red and the others in a cave, where she offers to help Red train to defeat Ptolemaios, showing him a vision of the future where Ptolemaios ruled the world, but told him that his actions in the present could change the future. As the battle outside grew fiercer, Ichima departed and reminded Red of her wisdom. 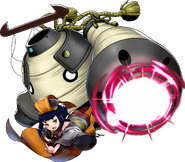 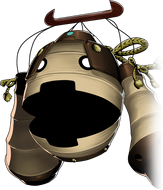 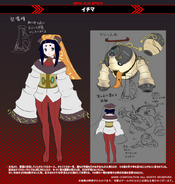