Virus created by the Doctor

No information
The Iron Fortress is a new vehicle and character introduced in Metal Slug Attack.

The Iron Fortress is a heavily modified Iron manned by an AI resembling a young child. She can direct the Iron to launch cannon shells at various distances and can launch missiles from the side turrets that can quickly decimate the enemy in front of her.

She is friendly towards humans unlike White Baby who often likes to "play" with them, and is also sympathetic to their cause as Amadeus programmed her as such. Amadeus sees her as his favorite, and even gave her an armor and weapon upgrade which she materialized in the form of a teddy bear backpack and canteen bottle. While she has a fairly friendly relationship with White Baby, she often dislikes the pranks White Baby performs on her. She is also on good terms with First Baby.

First appearing in "Protection of the Fortress", she is the victim of another prank by White Baby. When White Baby senses incoming enemies from afar, she goes out to confront them. The Iron Fortress soon follows her, where they encounter Allen O'Neil and Julia. White Baby instigates a fight and ends up getting wounded by Allen's new Red Sergeant Drill. The Iron Fortress arrives and drives the two off; while she dislikes the pranks, she still cares for her and Amadeus told her to protect those who she cared for. White Baby remarks that she'd never imagine getting rescued by her and "sleeps", so the Iron Fortress returns to Amadeus headquarters to have Amadeus repair her.

Following the previous United Front operation, White Baby pulls another prank on her, this time covering her with a gold finish. This causes her to become depressed and run away from others, as she is embarrassed with her appearance. White Baby arrives and informs her that the spot she is hiding in is bad and wishes her good luck. Unaware of how a United Front works, she is soon chased after by the Rebel and Ptolemaic armies. Eventually, she becomes fed up with her pursuers and annihilates them with her missiles.

In yet another United Front operation, Alma and Otto make an announcement about their new goal: a Golden Sergeant Drill, but Iron Fortress interrupts the announcement by saying she "hates her sister", while launching a missile at the pair. Alma barely manages to calm her down, but First Baby appears almost immediately after she finishes speaking, prompting Iron Fortress to launch more missiles at the three before running away. She runs into Allen Platoon and gets attacked by Allen's Golden Sergeant Drill, which severely burns her tank. Just as she is cornered, First Baby finds her and orders her to run. This makes her realize that her family cares for her and she returns to base to get fixed.

During Valentines' Day, Fortress decides to prepare some chocolates for the Doctor and her sisters to show gratitude to them. White Baby, overhearing this, has Amadeus researchers modify her tank to the appropriate theme; when she comes to, she becomes horrified and angered at White Baby for doing so without her consent yet again and storms off to a nearby town to dispose of the chocolate. The disposal of delicious chocolates causes the townspeople to riot over them, prompting the Regular Army to intervene. Scotia Amundsen also runs into Fortress, manages to calm her down and they work together to find the "treasure" Scotia is seeking.

Iron Fortress appears in "Random Walk rather than Capreca Number" which follows a similar storyline to United Front the 22nd, although she also encounters Agalia and the Mars People Rangers while on the run. After meeting Otto and Alma, she eventually decides to go rescue her sister. On the way, MS-Alice tries to dissuade her from doing so, as she would have to label her as an enemy, but she disregards her warning and rescues White Baby. White Baby tries to tease her, but she calls out her bluff, much to her sister's disappointment. 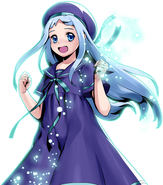 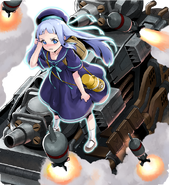 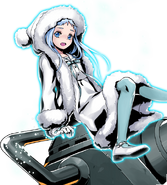 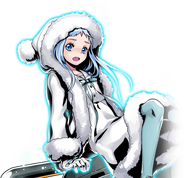 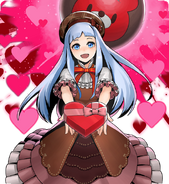 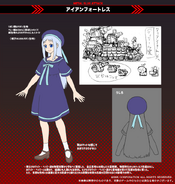 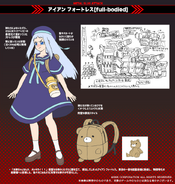 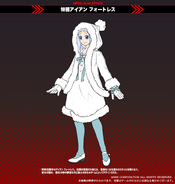 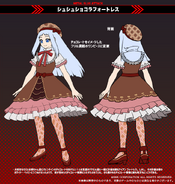