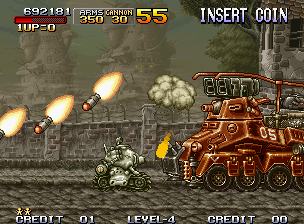 The Iron Nokana (also known as Steel Norcana in Metal Slug: Awakening) is the boss of Mission 5 from Metal Slug: Super Vehicle-001.

The Iron Nokana is a large, multi-purpose armored combat vehicle created by the Rebel Army. Its firepower is concentrated on the front, with a cannon and missile launcher turret on the top and a hidden flamethrower on its bottom. To compensate for the lack of firepower in the rear, a Girida-O is mounted on its back.

In supplementary material for the first game, the Iron Nokana is piloted by Chun Yutetsu (チュン・ユウテツ, Chun Yutetsu), Marco's combat school instructor [1][2]. He is not mentioned in Metal Slug SV-001 despite the game revealing the pilots' names for the first four boss vehicles.

The Iron Nokana's main weapon is the cannon on the front, which fires a series of arching projectiles that must be timed correctly to be avoided. Once the Iron Nokana has flames all over and its tires flatten, it lifts itself and exposes a flamethrower turret at the bottom which tries to burn the players if they come near it.

After the turret is destroyed, a few POWs come out of it, and the boss starts to fire a series of missiles at the players which must be avoided by crouching under them. If the players go to its rear, the Girida-O sitting on its back will start shooting at them.

The Iron Nokana returns in Metal Slug X replacing the Keesi II as the first mission's boss. Despite the new coloration, it functions the same as before. Abul Abbas appears in the background commanding the tank.

In Metal Slug Infinity, the Iron Nokana appears as a World Boss and as a Slug. Both have the same attacks as their arcade counterparts, however the World Boss variant is able to carpet bomb the entire field. The Slug variant is immune to electric shock and stun.

Early footage of Iron Nokana missing it's spikes in the front plate and it's also painted red.