Punishing and spoiling prisoners
Izabella is a new unit introduced in Metal Slug Attack. She debuts in the "Sadistic Emotion" Extra Ops.

Born in a middle-class family, she enjoyed her teenage years in a rich and comfortable environment along with an adequate education. One day, she would realize her true desire, to make the mighty warriors kneel in front of her.[1]

Izabella is an officer of the Rebel Army's prison system. Most of her job revolves giving rough discipline and punishment to her prisoners. She originally had a standard whip, but eventually received a special whip capable of electrocuting enemies.

While a feared sadist, Izabella has a bad habit of spoiling those she takes a liking to and has a large determination to do so. Izabella and Navy know each other well and are great friends.

In one instance, Izabella got an interest to Sisilia, even having plans to personally design Sisilia's prison cell. Despite failing, Izabella reminds Sisilia that she's on her capture list. Due to not being able to capture Sisilia, she eventually takes an interest to Caroline when Dion brings her in.

First appearing in "Sadistic Emotion", Izabella is busy torturing a prisoner while two guards gossip nervously about her. Navy comes in to talk with Izabella, and she has her come to capture and study one of their new Union segments, while Izabella learns about Sisilia and takes a liking to her. The two head to the Ptolemaic base and easily defeat Sisilia, Dragunov and Veronica. When Navy expresses doubt about Sisilia's music, the Ptolemaic officer gives them a demonstration, which Izabella enjoys. Unfortunately, it also revitalizes Dragunov and Veronica, forcing the two Rebel officers to retreat. Izabella is upset but tells Sisilia she will not give up in capturing her.

Though the opportunity never arose, causing Izabella to become bored again. When Dion lures Caroline and Towa into a trap, he is only able to capture Caroline. He hands her to Izabella, who immediately takes a liking to the mechanic. When Caroline escapes due to Dion's assistance, Izabella becomes furious with the lieutenant for letting one of her favored prisoners free. 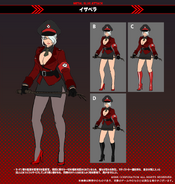