Josette is a new character introduced in Metal Slug Attack.

Josette is young girl seemingly around Caroline and Towa's age. Though she appears to lack any special skills, Josette appears to possess unnatural strength, being able to use Caroline's suit despite the massive strain it takes on her body. She also appears to respect Caroline, and is willing to sacrifice her own life to protect others.

First appearing in "Tiny Super Girl", Josette watches from a distance as Caroline and Towa contemplate on who can wear their new M.D.P.S-inspired suit after both of them are unable to do so. When the Rebel Army attacks the base, Josette sneaks into the workshop and dons the suit to combat the enemy. She locates Caroline and saves her from Vita and manages to critically damage her in the process.

Vita attempts to self-destruct, so Josette decides to use herself as a shield to protect Caroline and Towa. However, someone calls Vita and she vacates the area instead. With the situation resolved, Josette apologizes to Caroline for taking her suit without permission, allowing her to punish her in any way she wants. Caroline is instead awed that Josette managed to wear her suit, so she takes her to the laboratory instead for further study.

She makes a minor appearance in "Diaphtora Genesis" where she helps take Caroline to safety after she is defeated while battling Mira. 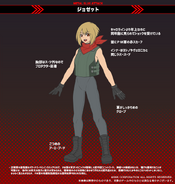 Design sheet, without the special suit 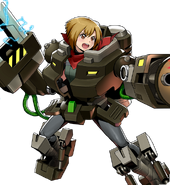