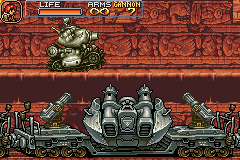 The Kaladgolg is the third boss in Metal Slug Advance.

The Kaladgolg is a troop train armed with a large laser cannon in the middle and has extra weapons which consist of two miniguns and two mine launchers.

The first phase of the fight will involve the Kaladgolg constantly firing its miniguns and launching mines. When it fires its laser, this boss will follow and track the player until it fires. To avoid this attack, the player should run to one of the edges of the screen, as the boss's laser cannot reach there. The weak spot is the laser cannon itself, and the secondary weapons cannot be destroyed. Once the Kaladgolg has flame all over, its attacks become faster, and launch floating mines instead of normal ones. Destroying one of these will provide the player a Rocket Launcher. Any type of Slug will make this battle easier (except the Slug Gunner, because the player will have to keep jumping up in order to shoot down with its machine gun). If the player is trying to defeat Kaladgolg without any kind of Slug, the easiest way to beat the Kaladgolg is to keep shooting its turret with the basic gun (use any kind of ammo if one still has it). Metal Slug (Black Hound is also recommended) and Super Grenade will make short work of this boss, and if beaten quick enough, will reward the player with the Kaladgolg Card.