Kanae is a new character introduced in Metal Slug Attack.

Kanae is the operator of the Patrol Slug, a Slug developed with cooperation between Mello and the Metal Device Project. She serves as military police, patrolling the area with her Slug. The Slug is designed to incapacitate rather than kill enemies.

She takes her duties as a police officer seriously.

First appearing in "Guardian of the City", Kanae arrives to a recently captured town where the soldiers want to leave as soon as possible as the civilians are tired of military presence. There have been reports of UFOs flying around however, much to her worry. Kanae remains behind to investigate the matter.

She eventually finds the suspects, Martians testing a Psionic Brain on innocent civilians as part of an experiment. Due to her resolve, the Psionic Brain is unable to control her. She defeats Pauline and destroys the Psionic Brain, but is disappointed that she could not apprehend the suspects. Kanae then remembers the civilians and takes them to safety, with one of them commenting on how she puts them at ease. 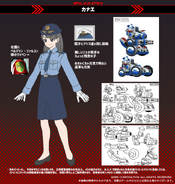