No information
Katalina is a new character introduced in Metal Slug Attack.

Katalina serves as a scientist in the Rebel Army and is a member of ACE. She developed the Marinesk, a slug-like tank that utilizes energy particles and compressed air, combining both in order to generate energy-based attacks which can be turned into an orb or tornado, the latter of which is assisted with what appears to be a book she carries with her.

First appearing in "Task Force 10th", Katalina learns from a soldier that the front lines are struggling to defeat the enemy. She decides to personally intervene, ordering the soldier to finish up her Marinesk. Upon arrival, she single-handedly routs the clone invaders and rallies the soldiers to destroy the Clone Incubator generating them.

Sometime later, Katalina leads an operation against the Regular Army with a Golden Cabrakan and numerous self-destructing pods. She is met by Avvio, who tries to hit on her, but she ignores his attempts to flirt with her. Eri appears soon after and tries to apprehend her, but she directs another group of pods to cover her escape.

Katalina later learns of Eight Eight and immediately takes an interest in the tank due to its unique traits and mysterious circumstances in which it was created. She also has its caretaker tag along during a briefing, who spits tea directly on her upon hearing of it; she cleans it up without any expressions. During the battle against the Invaders, she also speaks with Franke as a fellow scientist and both soon realize that there is no scientific reasoning behind its birth. Eight Eight blows the Invaders away with a powerful tornado, prompting Katalina to order a search party to find where the cocoon went.

She later heads to an underwater facility and meets up with Dion and Romy, where they attempt to defend the Invader being held inside from a rescue party. She is somewhat surprised to find that the intruder is their former ACE candidate Leone. During the battle, she asks her why she betrayed the Rebel Army and gets no response, before Leone tells her that her Invader is giving her difficulty in speaking and moving. She is later saved by Leone when the facility begins to flood.

When a Martian weapon starts threatening Rebel bases, Katalina meets up with Kriemhild, urging her to be more moderate in her missions as she's aware of how Kriemhild's strong sense of duty often places her in danger. Nonetheless she asks her to bring a victory so they could celebrate. 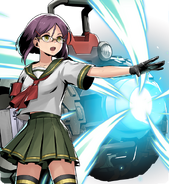 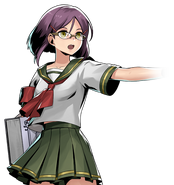 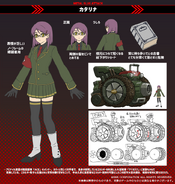 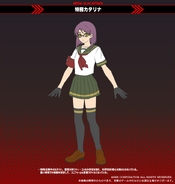