An independent weapons manufacturer, Kelly is known for her well-crafted weaponry which is in high demand by clients all over the world. El Dorado is one of her major clients. She takes care of her clients well, knowing that keeping them satisfied ensures that they will keep returning to buy her weapons again.

In battle, she utilizes a solar cannon which can cycle between short and long bursts. Since it relies on solar energy, Kelly wears a set of solar wings on her back to charge her weapon up. The "ammo" she uses is able to weaken enemy armor, causing them to take greater damage for a brief period of time.

When she is not busy making weapons for her clients, she spends time doing various odd jobs to make ends meet. She is an employee of an unnamed military corporation, and is acquainted with Maya, although they rarely have the time to talk with each other as they work under different departments.

First appearing in "Begin Training", Kelly finds herself with Leona in a mansion. They encounter some of Leona's comrades, who attack them on sight. Kelly is surprised that Leona is considering it as a training session despite the apparent threat they pose. After defeating the spectral entities, Kelly and Leona are put to sleep as they enter the Heroines world.

Kelly appears to have escaped the world sometime later, appearing in the desert after El Dorado is called in to deal with a Zoni Doloma destroying numerous supply convoys and threatening his people. Kelly is introduced to Odile, whose curious nature prompts her to wonder where El Dorado found her. The pair find and kill the Zoni Doloma, with Kelly warning Odile to get away as it attempts a last-ditch attack on her. When Odile asks her if humans would do the same thing, Kelly confirms her question. Returning to town victorious, Kelly is surprised when Odile starts thinking about eating the Zoni Doloma as they decide on what to do with their Try Coins.

Kelly finds temporary employment as the head of a local security team on a neutral island, though it is still part of the Sand Kingdom territory. She and her team find a commotion on the street and find a deceased man on the ground, and after hearing that Vicky and Chunyan were likely responsible, guesses they may have conspired to kill him since the three are from different armies. She chases the two across the island and manage to corner them, but their weapons malfunction when they are about to fire.

Vicky manages to solve the problem on her own, later revealed to be a notorious plot by White Baby to hijack the island in a bet with MS-Alice. Kelly ponders on how they can catch an elusive virus, and El Dorado suggests they release the two ladies. Though Kelly is hesitant since they committed a murder, she soon finds that Trevor is still alive. The two glare at Kelly for not checking to see if he was dead, but she attempts to defend herself by stating that he looked like he was certainly dead. Vicky and Chunyan then decide to take payback on Trevor and not Kelly for the trouble he caused them. 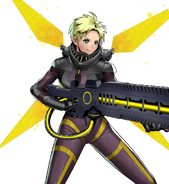 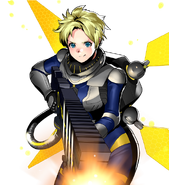 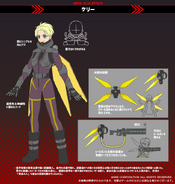