No information
Leone is a new character introduced in Metal Slug Attack.

Leone is a Rebel Army soldier who operates a Shoe tank. Abigail headhunted her after seeing her potential as a new ACE recruit. On her first mission, her tank was compromised by a group of parasitic Invaders, who decided to make the tank their new home. The larger Invader nestled itself on top of Shoe and is accompanied by two of its offspring.

Wishing to get the Invaders off her tank, Leone went to the Professor due to his knowledge of space biology, but by the time she did so, the large Invader had fused with the tank. The Invader utilizes her tank's missiles by separating part of its mass to bind the missiles together, before having its offspring drop it off at a nearby enemy. The large Invader's mass is also hard enough to allow the tank to take immense amounts of damage with little effect. Feeling completely ashamed, Leone decided to remain with the Martians until the Invaders could be removed from her tank. They appear to have taken a liking to her.

As a result of failing her candidate test, Leone panics easily and is gullible.

First appearing in "United Front the 29th", Leone was given a mission by Romy; realizing that she could join ACE if she succeeded, she eagerly took the mission. Unfortunately, her tank attracted several Invaders that stuck onto it during her mission. In desperation, she went to the Professor, but the procedure was not successful as they had fused with the core parts of the tank by the time she arrived. Pauline suddenly appears and suggests she face the Pharaoh, who might have the knowledge necessary to remove it. Hopeful, Leone then rushes off with her tank to fight the Pharaoh. She successfully returns with numerous United Front coins, but she was unable to buy the treasure; Pauline had fabricated the story and manipulated her, but her desperation to remove the Invaders from her tank made her fail to notice the deception. She then decides to remain with the Martians until the Invaders could be removed.

Leone is later sent to save an Invader from a facility, as her Invader sensed it calling for help. She is terrified to find the Invader and subsequently her seniors, most of whom don't take kindly to her desertion. During the battle, the facility begins to flood, so Leone saves them all by having her Invader wrap them in its goo.

Soon after, Leone learns of a similar Invader to her running around on Earth and asks Halle to accompany her to find the lost child, hoping that it would allow the Invader to leave her tank. Subsequently, she runs into Dion and Olga, who are also looking for the tank. The two Rebels find the Invader first, but Leone and Halle soon arrive and unintentionally scare it off. Olga's aggression towards Pocke prompts it to summon the Rugname, taking it, Halle and Leone away despite her protests. 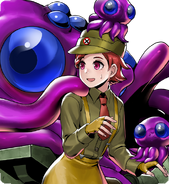 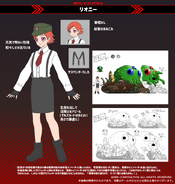