A jiangshi living in the remote mountains, Li Lin lived a solitary life until she met the Martians by chance and learned about some human customs. In battle, she summons a wide range of ghosts to attack her enemies. She enjoys playing pranks on people.

First appearing in "Trick or Treat", Li Lin is by herself when she encounters several Martians and captures them, learning of Halloween before presumably draining their life force. She catches news of a Halloween party being hosted and attends, as people would be less likely to confuse her as an actual zombie. Prior to attending the party, she saw several Regular Army supply trucks and played a trick on them, causing the entire convoy to go missing. The host of the party, Bloom Metzelei, orders her to fix the problem and the candy is safely retrieved. Bloom later leaves with her "children", leaving Li Lin alone with Nikita, Whip and MS-Alice. 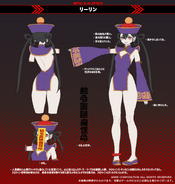