Lieben is a new character introduced in Metal Slug Attack.

Lieben is the daughter of Bloom Metzelei and one of her many "children". She possesses restorative powers that allow her to heal everything she wishes. Due to this power, there were many kidnapping attempts on her, so Bloom hid her in a forest on Earth for her own safety and told her to remain there.

She is a kind soul who is highly attuned with nature, taking care of everything in her forest while waiting for Bloom to return. She detests unnecessary violence, but will fight to defend the ecosystem if forced to.

First appearing in "My Little Forest", Lieben is relaxing in her forest when she finds a wounded bird and heals it. She then hears sounds and decides to investigate, stumbling into Little Lady Black and the Ptolemaic Army, who had decided to cut through her forest to attack a Regular Army base. Lieben insists they leave the forest as they are disturbing nature, but the aggressive Black Hound attacks her in response. Fortunately, Biene Goldenes arrives to protect her, as Bloom had asked her to do a wellness check. Biene's bees incapacitate Little Lady Black, upon which Lieben tries to heal her, but Biene stops her from doing so after reminding her that doing so would cause more problems for the forest. 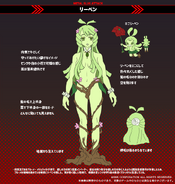