Linhua is a new character introduced in Metal Slug Attack.

Linhua is the younger sister of Chunyan. She also enjoys making anman buns, steamed buns with a sweet red bean paste filling inside, which is her sole motivator. After delivering a batch of these buns to her sister who was stationed at a Ptolemaic Army base, she was offered a position with them which she accepted. She does not mind pursuing romantic relationships with others regardless of gender if they can make anman buns better than her.

Like her sister, she specializes in martial arts, albeit in energy-based attacks rather than geokinesis. Those who are hit by her attacks are said to lose their will to fight and unable to stand their ground.

First appearing in "Search & Destroy 3rd", Linhua surprises Lithos with some anman buns. After Lithos remarks that she wouldn't advance in the army, she misinterprets it as her inability to make better buns and heads off to find the culprit to resume training. Her search leads her into Type:Ant-Lion and after a brief scuffle, Ant-Lion escapes. Lithos, worried over the fact that she called reinforcements when nothing was stolen, tells Linhua to help her by claiming it would help in her training. Linhua begins searching for Ant-Lion despite not knowing where she went. 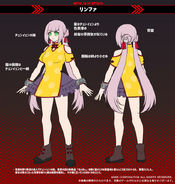