Lithos is a new character introduced in Metal Slug Attack.

Originally a member of the Ptolemaic cult led by Mira, Lithos deserted the cultists after seeing that staying with them would not let her advance further in her career. As a result, she decided to join the growing rebellion as she saw a greater opportunity with them.

In battle, she operates the Hammer DX-5005, an excavator that has been modified into a hammer tank.

First appearing in "Girls Be Ambitious", Lithos deserts the cultists to join the growing rebellion. As natural, Dragunov is suspicious of her motives before Martians attack. With her assistance, the rebellion is able to repel the assault, convincing Dragunov of her sincerity. She tells Dragunov that she intends to surpass her, gaining the senior commander's respect.

During a United Front operation, Lithos pops in a conversation between Sho and Yoshino, offering to replace him and that she could handle the enemy herself. Impressed by her resolve, Yoshino allows her to order Sho around. As they fight, Sho notices that she has people helping her, in which she tells him that she forced them to. Yoshino is impressed by both her ability to fight and lead soldiers. Once the operation concludes, Lithos reminds Sho he needs to redeem his coins and offers "encouraging" moral support to her "subordinate" to help him reach the store despite being completely exhausted.

Lithos later takes sentry duty to search for a thief apparently stealing their equipment when she is surprised by Linhua. When she tells Linhua of her problems, Linhua goes off to find the thief, much to her surprise as she tries to catch up. Linhua eventually runs into Type:Ant-Lion, but the android escapes and nothing was stolen, much to her worry as she had ordered Linhua to call Dragunov for reinforcements. Lithos manages to convince Linhua to assist her in finding an excuse after claiming it would help in her anman training. 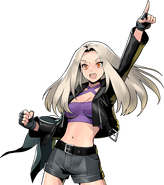 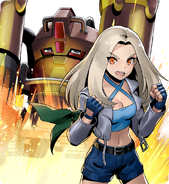 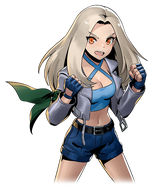 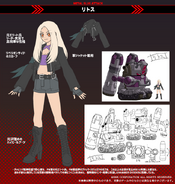