Little Lady Black is an AI developed by Caroline, inspired from both the Regular Army and Amadeus Syndicate AI. She takes on the form of a rebellious teenager, and her actual body is a Black Hound that's been outfitted with camouflage technology that keeps the tank hidden, protecting it from incoming attacks. Due to this, she looks as if she's just a normal person, though she actually isn't.

Caroline originally intended to have Little Lady Black be a superior AI with a friendly, helper-like personality, having used Towa's personality as an initial base. However, due to encounters with fussy superiors and scary teachers, it has become so aggressive that it attacks on sight. Despite this, Little Lady Black thinks highly of Caroline.

Little Lady Black first appears in the Extra Ops "Punk! Punk! Punk!" as a newly constructed AI, with Caroline excited to show Towa. However, before she is deployed, Caroline asks Towa to be the AI's personality base, and she agrees to.

She later accompanies her creator and Towa to the city where they encounter Nowan and Odette. Her personality took a drastic change when she met Yoshino and Dragunov, and then passed the rage onto Nowan and Odette. Nowan fights Little Lady Black, taking little to no damage from her attacks due to their numerous fissions. Even when the Invaders leave, she continues attacking them, much to Caroline and Towa's surprise. 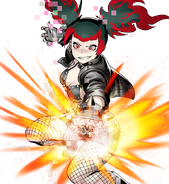 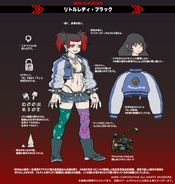 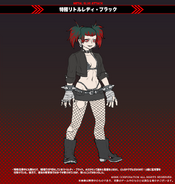