Unlike her superior Grazia who is somewhat childish, Loretta takes her position seriously and is able to interpret her speech to allow others unfamiliar with it to understand. Loretta is Grazia's most trusted comrade, as she is the deputy commander of the Blaze Brigade. She was originally a member of ACE, but Abigail had her moved to the Blaze Brigade to help support it during its inception. She has since remained with them as their deputy commander ever since.

She pilots a special Blaze Brigade machine when heading into battle; Grazia also uses this machine, but has a different attack style as only part of it is revealed. She is also skilled in sewing, having made special outfits for herself, Grazia and Norah.

First appearing in "Fire Inhibition", she is tasked with Huracan in destroying a rogue Real John that is causing problems for both the Amadeus Syndicate and Rebel Army. Disgusted by the noxious smell emanating from the research facility, the two work together to quickly destroy the Real John. In the process, Loretta destroys the whole facility with her machine, and the two leave to get away from the smell.

With the Blaze Brigade growing in size, Loretta later accompanies Grazia in touring a newly modified Big Shiee. Dragunov, trying to find suspicious projects linked to Mira, is found by Grazia, who sends the Big Shiee after them. Dragunov destroys the Big Shiee, who ends up getting her respect. Loretta advises her to retreat, and the two do so.

She later partakes in a large battle against the Martians to increase the Blaze Brigade's reputation in the Rebel Army, with Norah joining as a new recruit. She is initially skeptical of Norah's capabilities, believing that someone as calm as her was able to endure Beatriz's harsh treatment of her soldiers. Eventually, she discovers her true personality when she finds Norah battling Marty. Loretta drags Norah away to safety when she reveals Grazia is going to burn the whole place down.

Loretta later confronts Bloom Metzelei when the Invader starts attacking Blaze Brigade positions. Though Norah believes they should run, Loretta tells her that they must fight no matter what, following her superior's principles. Fortunately, they are spared from the fight when Fedeln Metzelei comes in and ends up driving Bloom off.

Sometime after this, Loretta is in one of the Rebel Army bases when the Invaders attack and overwhelm the base. She meets with Destrade and Huracan, but is unable to relay orders as they completely disregard her and join the fray after seeing Allen O'Neil fighting. Beatriz, who was overseeing the base, attempts to shove the repair efforts to her after the battle, much to her surprise as she should be the one taking responsibility. However, Allen intervenes and has Destrade teach her a lesson.

Loretta later watches a Blaze Keesi being built and comments on how it will help annihilate Blaze Brigade's enemies. While on a test run, Loretta notices an assailant attempting to target Grazia and shoves her out of the way, taking the blow instead and is knocked unconscious. She later comes to and witnesses Grazia attempting to use her full power on the enemy, stating that it is a waste. Loretta advises Grazia to retreat, which she interprets as defeat. In response, she explains that it is better to withdraw from an insignificant battle and they should regain their strength for a more decisive battle, which Grazia accepts and orders a full withdrawal.

Blaze Brigade later takes over a town as a part of their plan to make the brigade well known. She is sent to deal with a situation in the said town, where zombies are overwhelming the local garrison there. She finds Nantes, who had been transferred to take part in the mission, and asks her what she is doing. Nantes tells her that she thought they would need reinforcements, but Loretta refuses her request, as asking for assistance, especially from Allen Platoon, would make her look weak. She states that they have enough soldiers on hand to deal with the situation, and they soon track the source to a cave. The source then tries to offer wisdom in return for being freed, succumbing most of the members, but Loretta is unfazed and destroys the source (stating that it would not benefit humanity), despite Navy's request to preserve it. She returns to base to deliver her report to Grazia, who praises her for the work she did.

In "Subjugation Tactics", she is at sea with Grazia, Norah and Beatriz. Grazia tells Beatriz to gain some self-confidence as a leader when she starts complaining of being unable to see Abigail again, which Loretta tells her that Grazia wants a better relationship by taking her along. This prompts the two officers to start fighting. Norah is unsure of who to support and asks Loretta why they are going to an empty field. Loretta explains that they are going to build a base there and that they will give it their all to see her goals accomplished.

In "Cities on Fire", parts of Loretta's history is revealed regarding her helping the Blaze Brigade and remaining with them ever since. 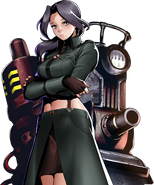 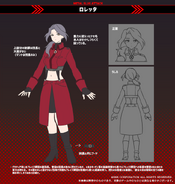 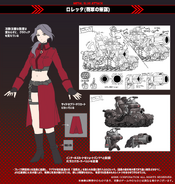