Louise excels in scouting for the Regular Army, and often goes on solo excursions. She is armed with a sniper rifle and also carries a radio to call in airstrikes on targets.

She was in a relationship with Bersek, but he mysteriously disappeared, leaving her heartbroken. Initially she spent most of her time finding out where he went, although what she plans to do after finding that he has affiliated himself with the Invaders remains unknown.

First debuting in "Tropical Battles", Louise recalls an incident three years ago where she was wounded in a mission. Bersek found and treated her injuries. During the night, they heard hostiles outside, and Bersek went out to confront them, despite Louise's protests. Louise would eventually be found, though she is clearly troubled with Bersek's fate and began her search for him.

She observes Rita's battle against Towa and reports it to Sophia. Sophia suggests that she should find some closure with the other girls since she has not found Bersek, but she refuses and resumes her search for him.

Sometime later, Louise has a funny intuition that Bersek has returned to Earth and has Reika come with her to investigate an island. They soon find a destroyed ship, and Louise recognizes the work as Bersek's. Though relieved he is still alive, Reika prevents her from tracking him as there were signs of an Invader with him. 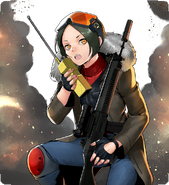 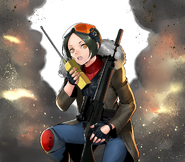 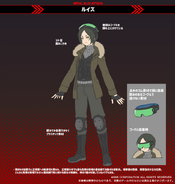