Lucy young girl who is part of the Animal Squad, a squadron that consists of Special Force oddballs. She adores cute things, especially frogs, as her attire is generally themed after them, even riding a frog mecha into battle which was customized by Caroline and Towa.

When she first served in the Ptolemaic Army, Dragunov and Caroline took care of her for a bit.

First appearing in "United Front the 13th", Lucy is assigned to the Animal Squad, which is deployed for a United Front operation. However, she oversleeps and panics as she is still a rookie and her lateness would make her look bad to her superiors. However, she is brought over by Caroline and Towa, who reveal a frog mecha to her which she adores. The two then drag her to the battlefield to partake in the operation. 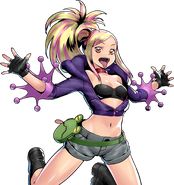 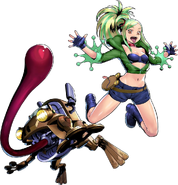 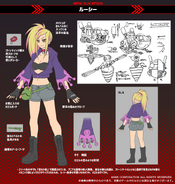