Between Medium and High 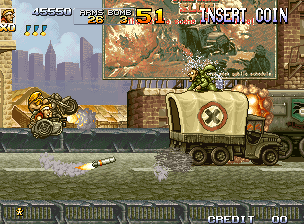 The M34 3-Ton Truck is a cheaper alternative to the Landseek used to transport troops. Unlike the Rebel Van, this provides an easier exit as the troops don't need to crawl out one by one.

When not driving, the truck will either appear already parked or back itself in reverse. It will continue to spew enemy infantry until it is destroyed. Other soldiers can attack from its roof. Destroying them may provide weapons or Slugs.