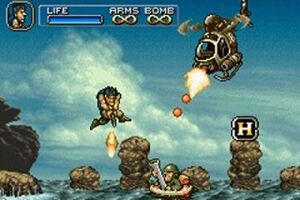 The MH-6S Masknell is an enemy vehicle in the Metal Slug series.

The MH-6S Masknells are light utility helicopters used by the Rebel Army. The Masknells are fast, cheap, reliable, and can pepper the player with their front-mounted machine gun. They usually work in packs and scatter all over to panic the players.

Occasionally, a squadron of five Masknells, headed by a red Regimental Masknell, will fly in a line and make strafing runs at the player. Destroying the red Masknell first will cause the entire helicopter column to crash into each other, netting huge points for the player.