A new AI developed by the Regular Army, Heart is the operator of the TS-001 Tandem Slug. The Tandem Slug has a melee and ranged form; in its melee state, it charges at the front lines and bashes enemies with its massive fists. If this form takes too much damage, she detaches the melee components and turns into a ranged form, firing from both a rifle and cannon.

Her personality was based off MS-Alice's possible decodings, though this was before she gained self-awareness. As such, she is rather cold, calculating and does not understand the meaning of most words. Upon being hacked by White Baby, she gained self-awareness, but still retains her typical cold manner, albeit with an unusual attachment towards Tarma Roving.

While she appears much older than Alice, she is actually her younger "sister" since she was created after her.

Due to Alice being damaged during a Martian attack, Heart takes command of Alice's unmanned division and leads the attack against Amadeus Syndicate forces. Prior to the attack, Alice communicated with Heart and told her to ensure the safety of her tanks.

Heart encounters White Baby and the Iron Fortress. In the ensuing battle, she loses a significant amount of her forces (much to Tarma's disgust), but manages to surround the two Amadeus AI with her remaining forces. White Baby hacks her, though she states that it is ineffective as she relinquished command of her forces as soon as she started and she can buy more bodies with the coins she acquired. She states that it was too fast, before realizing that she shouldn't have a concept of time. White Baby's hack caused her to become self-aware, and when Tarma arrives, she stutters and orders him to leave as her plans were thrown off with his presence. Tarma tells her that she has to withdraw her forces if he leaves. Embarrassed, Heart places Tarma on her before speeding back to base with her forces.

Later on she's conversing with a newly constructed "Slug Puncher" when the two hear Tarma yelling for his life in the distance and they decide to rescue him, despite knowing it is a waste of time. The assailant, Mizuna, puts up a good fight against the two, but is stopped by Yoshino before the fight escalates. MS-Heart tries to use the opportunity to attack, but Tarma stops her from doing so. MS-Heart analyzes Yoshino again and finds her too powerful to deal with, so she places Tarma on her again before speeding away.

Alice later returns to take temporary command of the AI division and the group is sent on a mission against the Ptolemaic cult, fighting a Sky Jupiter Queen variant which destroys most of the SV-001s. Midori arrives and destroys the Sky Jupiter Queen with her new weapon, having considered Alice to be part of her family. Alice is put into shock and later appears to "disappear", but MS-Heart tells Midori that Alice was simply shocked by her words and that she went into power conservation mode to make the journey back. She then wonders to herself how Tarma would take care of an AI (namely, her).

Following the operation against the Ptolemaic Army, Alice returns for more maintenance, so Heart temporarily resumes command of the AI division. She learns that a Regular Army base has been captured by the Rebel Army, and makes plans to recapture the base and save the nearby town. She is paired with Victoria for the mission, with her mechanical falcon Wade providing her with valuable reconnaissance to allow her to plan an attack. Her plan goes awry as it ends up being a trap, but Wade is able to drive the Rebel Army away with its "Firebird" mode. When Victoria suggests to chase the fleeing Rebels, Heart refuses, prioritizing the safety of the town first.

MS-Heart later does a simulation run with Midori, showcasing numerous weak points, but also pointing out to her that most of these are only effective in theory and not in practice. As they're talking, First Baby inexplicably arrives, and Midori grabs her new Slug Copter to assist MS-Heart. The Slug Copter is severely damaged by First Baby, and Midori is in danger of being injured, but MS-Heart is able to catch the young mechanic. After First Baby hesitates for a brief moment, MS-Heart tells Midori to quickly shut off the circuit she came from to dispel her.

While idling about with MS-Alice, the two AI soon detect a swarm of enemy bees heading towards their position. They use mass-produced Tail Slugs to defend the base, but all of them are destroyed by the swarm despite their effectiveness. Knowing that the base will be overwhelmed, Heart has Alice assist in evacuating the base's personnel while she stalls the swarm for additional time.

She later performs a joint operation with Alice, having gone additional maintenance and the latter joining in through an imprint. 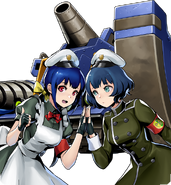 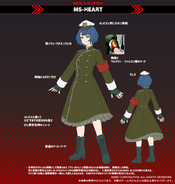 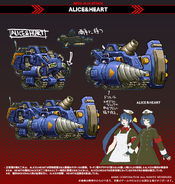