Private of the Regular Army

Madoka Aikawa (相川 まどか, Aikawa Madoka) is a support character in the Metal Slug series. She functions exactly like her sister, Rumi Aikawa, and replaces her in some missions. She also looks exactly like Rumi, only with orange hair and a grey backpack, pair of shorts and boots.

Madoka first saw the Regular Army's facilities as a mere patient, because her younger sister, Rumi, interned both her and their mother to the hospital. Madoka had a severe weakness in her legs that could have rendered her crippled permanently, and their mother was having heart failure.

As soon as she started feeling better, she decided to inscribe into the Regular Army and work as a supplier like her sister. But what was going to be a simple transfer to another base as her first mission, ended up with her suffering the same paperwork mistake as her sister and being transferred to the heat of battle.

She now goes to the front as a battle supplier and medic to serve the friendly troops, but somehow she ends with only minor injuries, and because she walks endlessly trying to remember where she came from, many soldiers see her as another Wandering Ghost.

Madoka makes her playable debut in the "Snatch Wars: Season 2" event as a pre-acquisition unit. A more seasoned fighter than Rumi, Madoka pulls out a taser when in close range. Her long range attack is pulling a bazooka out of her bag and shooting multiple projectiles at once. Unlike Rumi, where she buffs units by sending attack power ups from above, Madoka works as a healer and throws a medicine box from ground level at her allies to recover health.

Since Madoka reuses some of Rumi's new sprites rather than her arcade ones, Madoka sports a darker hair color. Her grey garments and backpack are also in a darker shade.

A new variant called Everlasting Summer Madoka is introduced for the "Double Face" Extra Ops as a small-tier pre-acquisition unit. Donning swimwear, ES Madoka loses her flight distance for critical attacks. Her special is an explosive volleyball that explodes a few seconds after landing. Unlocking her fourth skill lets her throw three balls at differing distances.

She and Clone Abby make the "Double Face" Team.

Madoka appears as as a ★5 unit. At the beginning battle, she calls out Rumi to help disperse supplies to their allies. Madoka attacks with her bazooka and counters by swinging her taser and deploying a shield around her equal to 200% (up to 300%) of her attack. Her special is tossing a medkit that heals the whole team by 350% (up to 500%) of her attack while Rumi throws ammo chests that boosts their allies' attack stat by 15% (up to 30%).

Both sisters share the same health pool, however they take 50% less damage from physical and special attacks. Using them increases Regular Army units accuracy by 10 and critical rate by 2%. 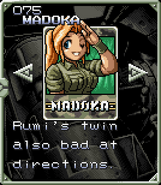 Madoka with her bazooka 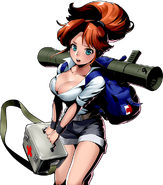 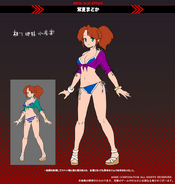