Maki is a new character introduced in Metal Slug Attack.

Maki is a kitsune that the Red Goblin met during his travels in a forest who takes on the appearance of a young woman. Constantly harassed by bandits, he intervened and drove them off, so she decided to accompany him as thanks. She serves as the Red Goblin Society's primary cook and medic, as the group is constantly getting injured in their battles. She carries a mysterious potion that allows her to heal any wound.

She is accompanied by many bear companions, whistling to summon them to assist her in battle. She also utilizes healing charms to help support her allies in battle. If the battle becomes too dangerous for her, she transforms into her kitsune form and flees the scene.

First appearing in "Task Force 19th", Maki accompanies Jin to a forest where she warns the swordswoman of the dangers of various plants in the area which are poisoned. The pair then run into Ai Agate and she compliments Citrine to the Invader's appreciation. The three then discover a mutated Queen Big Snail and pursue it, with Jin trying to attack Agate due to her being an Invader. Jin ends up poisoning herself to the mutated snail, forcing Maki to transform into her kitsune form to heal her. The snail eventually escapes and she remarks alongside with Agate on how cute the snail probably was before its mutations.

During a United Front operation, Maki saves Licht, Elena and Jin from Jane Doe's zombies by burning poisonous herbs that destroyed the zombies' organs. She accompanies them to the shop where they are set upon by a large group of zombies, this time modified to be resistant to the poisonous mist. 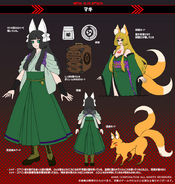