The Mars People are the main troops of the Martian army and the second most prominent enemy of the main series after the Rebels.

Mars People have a large head with multiple tentacles placed below. Their tentacles are fairly strong as they can hold a weapon using only one of their appendages. Contracting their tentacles allows them to jump large distances and descend slowly. They have great intelligence and own psionic powers like telekinesis and space-warping in various degrees. They are also experts in necromancy and biological engineering.

According to their death animations, Martians possess a skull and green blood. Some artwork shows them to have mouths. The Game Over screen of Metal Slug 6 shows the skull of a Mars Person, revealing them to also have teeth and a nasal cavity. The skull appears to be made of bone. Severed tentacles writhing about after dismemberment suggest an involuntary nervous system.

Their weapon of choice is a gun that can fire varying types of spores. These spores are destructible by knife and gunfire. Mars People's words are mostly formed with the syllables Pa-Pe-Pi-Po-Pu (except Rootmars and Marty). These syllables also form the Martian Language, and a translation device is required to understand them.

The Mars People appears as a hidden playable character and mid-boss. He attacks using his tentacles and his gun, and can also call a traditional Japanese-style UFO. His attacks are named after paranormal folklore, such as the Tunguska Blast of 1908 and the Roswell incident.

He appears again as a playable character, with little different than his SVC counterpart. A Mars People model is available in a variety of different colors. 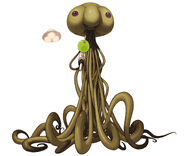 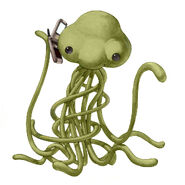 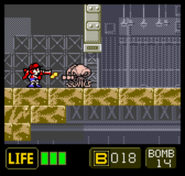 Art by FALCOON
Add a photo to this gallery
Retrieved from "https://metalslug.fandom.com/wiki/Mars_People?oldid=55790"
Community content is available under CC-BY-SA unless otherwise noted.