Listening to music, roleplaying as a rodent

Matilda is a new character introduced in Metal Slug Attack.

A Ptolemaic Army soldier, she proclaims herself as one of Miharu's "best" pupils, despite her insistence that she never trained her. Whereas Miharu is limited to mostly melee combat, Matilda has modified Miharu's attack style to her own needs, which also includes the addition of ranged combat where her spear can also act as a gun and rocket launcher.

If a particular enemy annoys her, she'll become incredibly angry and use a more devastating form of combat against her enemies, which she calls her "GO mode". In this stance, she becomes much more agile and increases the power of her attacks.

She appears to enjoy dressing and acting as a rodent, given her facepaint whiskers, her hair ribbon adding "ears" along with her combat sounds. She also enjoys listening to music.

First appearing in "Freestyle", Matilda accompanies her "teacher" and they encounter a Blaze Keesi along with Grazia, Loretta and Norah, where she wounds Blaze Brigade's second-in-command. The Blaze Keesi puts up a good fight against Matilda, and as a result she is forced to use her "GO mode" to destroy the airplane. In the process, she also injures a large amount of Blaze Brigade soldiers, before Grazia uses her flames to keep her at bay. Grazia is later persuaded to retreat by Loretta; Matilda is annoyed by their cowardice, but she is unable to pursue them with Grazia's flames still covering their retreat.

During an operation against the Rebel Army, Matilda continually pesters Miharu over their relationship as master and pupil. The two then run into Julia, who promptly takes their ammo.

She is later sent on a special investigation at a crypt when she spots Maria tied on a Black Hound and promptly rescues her. Maria, who is possessed by her armor, tries to kill her but Matilda realizes the benefits and lures Maria to fight the Guardian of the Crypt, a blessed Mummy Warrior she had difficulty passing through. Maria manages to defeat the guardian and approaches Matilda, although she is able to sense her murderous intentions and dodges her as she resumes investigating. 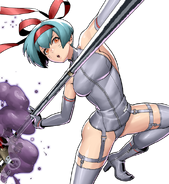 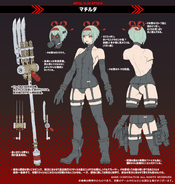