Maya is an employee of an massive military corporation. She specializes in mining, operating a massive mining excavator. The excavator is outfitted with special technology, being capable of self-repair and replacing its own drills itself (which she can launch the one was using to serve as a protective barrier). The job has also kept her well fit, given her appearance.

She comes from a poor family, and is the sole proprietor for her younger siblings, whom she dotes on and uses the money she obtains from her job to keep them well fed and happy. Due to this, should her paychecks be threatened, she becomes completely unreasonable and can easily get carried off, having destroyed several other ruins in the past in unknown incidents.

She is acquainted with Kelly, who also works in the same corporation as her, although they work under different departments, so they barely have the time to talk with each other.

First appearing in "Task Force 6th", Maya is contacted by her corporation to acquire mysterious energy from some special ruins. She immediately takes up the offer and departs, telling her siblings to take care of each other while she's gone. Upon arriving at the ruins, she finds Marco and Midori, accusing them of stealing her site and monopolizing the energy before attacking them, forcing Marco to defend himself. In a fit of rage, she accidentally collapses the ruins with her machine, but is rescued by Marco. Marco apologizes as they were simply testing a new weapon, but it took the energy she was after. This prompts Maya to demand that they give the energy to her, as her corporation needs it, and she chases after the two as they flee.

Maya is later contacted by her employer to secure some ore, being given a new heat-resistant drill and clothes. Outside at the entrance, she finds an unconscious woman outside the entrance, giving her food and drink. The woman introduces herself as Ido and thanks her for her hospitality when they are attacked by Martians. With Ido's help, they are able to drive the Martians out and Ido gives her a chunk of the ore she found during the battle, prompting Maya to headpat her in response. 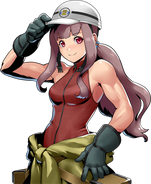 Story illustration (without their excavator) 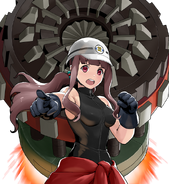 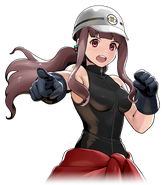 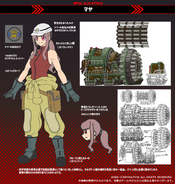