Metal Slug: 1st Mission is a run and gun video game for the Neo-Geo Pocket Color handheld platform created by SNK. It was released in 1999 in both Japan and North America.

In a land of continuing strife, illegal arm sales are occurring with disturbing frequency. Subsequent investigations reveal that the distributors of the weapons are not guerrillas but the Government Forces themselves. The distribution center for the weapons turns out to be more massive than estimated, and it is clandestinely manufacturing new weapons which even include the top-secret SV-000 "METAL SLUG" prototype currently in development. The commander of the squad protecting this region turns out to be the expert at guerrilla warfare Colonel Hilde Garn, and his aide-de-camp turns out to be the master at hand-to-hand combat Lt. Colonel Macba, who stood on the front lines himself and struck terror in the hearts of the enemy. If this squad led by Hilde Garn, which is praised as the mightiest in the army, is the force behind the illegal weapon sales, it was feared that this could lead to a coup d'état. The Intelligence Agency of the Government Forces, taking a particular grave view of the situation, decides to enlist the services of the ultra-elite Special Forces Squad Peregrine Falcons.

The mission is given: infiltrate the material distribution center, destroy it, and capture the villains.

This game plays much like the traditional Metal Slug but with some changes. The most notable change is the increased number of missions available, seventeen compared to the usual five/six. Not every mission ends with a boss battle, and depending on how the player performs in a mission, they are able to finish the game without seeing every mission.

There is one character to play with, and although the game gives no name for him (the official 10th anniversary website merely calls him "Hero"), his appearance is very similar to Marco. After beating the game once, a female character becomes available, but the game never follows a storyline with her. 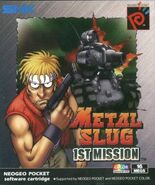