Metal Slug: 2nd Mission is a run and gun video game for the Neo-Geo Pocket Color handheld platform published by SNK. It was released in 2000 in both Japan and North America. The game was developed by Ukiyotei.

The success of the so-called first mission where the Special Forces Squad Peregrine Falcons saw battle has fallen down the memory hole, but new intel wends its way to the Government Forces. It seems the Special Strike Force "Phantom," led by the rebel army's Lt. Colonel Macba, has begun a campaign of insurgency and has taken many Government Forces soldiers hostage. Subsequent to that, an even more shocking truth is revealed. The Rebel Army has made contact with aliens and is proceeding with the development of weapons employing unknown technology. The situation is now critical!! There's only one option left: lay siege to the enemy base single-handedly and rescue the hostages!

Metal Slug: 2nd Mission features a similar gameplay and forked mission structure as its predecessor. Differences from the two games (seen below) consist of player control, different weapon types, and reworked mission routing from destroyed slugs. The main story revolves around two soldiers codenamed Gimlet and Red Eye, each one having their own plots that are interconnected.

Alongside the returning SV-000 (now in its second prototype phase) and Slug Flyer, a new vehicle called the Slug Sub, which is a small submarine used in the game's new underwater missions, is introduced. The Slug Sub fires torpedoes, mines, and homing missiles depending whether its underwater or submerged. Destruction of the Slug Sub leads to a mission where the player rafts on an Emergency Boat.

Below are all 38 missions in Metal Slug: 2nd Mission. Tequila can access all missions plus the three entrances of Mission 31 at any time without starting the game from the beginning. Visit Gimlet and Red Eye's pages for more details on their mission routes. 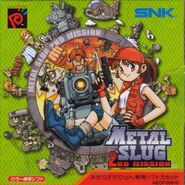