Metal Slug: Commander is a card-based mobile game developed by SNK's Hong Kong branch, originally available for preregistration on the Apple App Store and Google Play in October 2020 and released on August 19, 2021.

From the game's introduction sequence:

These are the Syrubis Islands, where various cultures have all coexisted in peace for nearly half a century. However, the flames of war are once again growing closer to this peaceful world. One of the main causes of this is...

General Morden is leading his forces, which have been out of action for a long time, but they have returned to center stage. Because of the discovery of the Lubis Ore, a new resource, the competition for resources lead to the outbreak of war.

In order to stop the resources being monopolized by the Rebel Army, the Regular Army also sent out a special squad of legendary heroes. After a fierce battle, they were able to fight off most of the Rebel Army. Just when they thought that the battle was going well...

It wasn't just the Rebel Army, the Ptolemaic Army who were set on world domination and their deadly Revolution Army. As well as the Space Army that is always thinking of invading Earth, and the Desert Army that has a tight hold over the ruins all joined the battle too.

New commanders, it's up to you to put an end to this chaos! 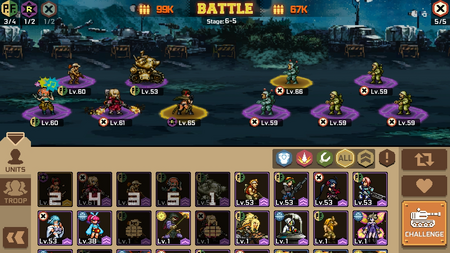 Metal Slug: Commander is a card based game where players must assemble a group of five units to defeat the opposing player's deck. The group is split into two layers; the 1st and 3rd units are on the upper layer while the 2nd, 4th, and 5th units are on the bottom layer. A unit's positioning on the battleground affects the distance they are from the enemy. Strategically, long-range units are placed far back while melee and tank units are placed closer towards the enemy group. 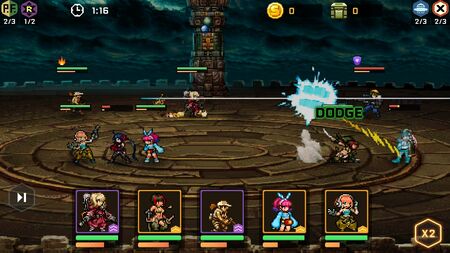 A round starts by units fighting those on their layer. Once one layer has a clear victor, the remaining units run towards the other layer. In some cases, both layers will meet somewhere at the middle. Battles are open, so units can bypass enemy lines either at their own will or by their positioning from the other layer. Units can turn around to fight their trespassers.

A unit has multiple standard attacks that are done automatically. As they deal damage, a yellow bar underneath their icon fills up. A complete bar causes their icon to engulf in flames, and their special attack is then activated by tapping on their icon. Some special attacks can affect the other layer, although others require for the unit to be on the same lane as their enemy in order to connect.

As the player progresses through the campaign, they can earn skills usable in battle, although only one skill can be used per fight. These are split into Regular Skills (obtained through Military Intelligence) and Story Skills (obtained by clearing specific stages). Skills are upgraded by collecting Tactic Skill Guides and using them at the Archives in the Logistics tab.

Similarly to Metal Slug Attack, it has its own guild-system called a "Legion" and also a social system called "Allies". 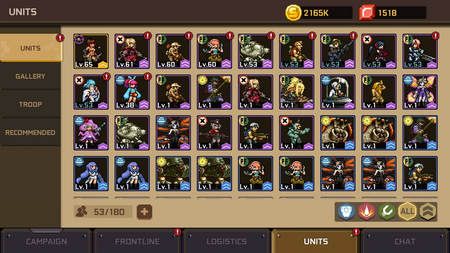 Alongside the main Metal Slug cast, Metal Slug: Commander features some of the characters from Metal Slug Attack. They are split into six factions under three rarities (★3, ★4, and ★5) each with their own faction bonuses and counters.

The Units can be upgraded with Gold and Unit EXP, however upon reaching a certain level, one must use their Unit Merit in order to unlock or upgrade a unit's skill. Gears can be equipped on units to increase their raw stats. Some Gears have a faction-specific bonus when given to the respective faction unit.

The player can promote, retire, reset, or reorganize units.

A unit's rarity corresponds what color rank they'll begin once acquired and what maximum rank they can promote to. Rank color goes from Green (★3), Blue (★4), Purple (★5), Yellow, Red, and White. Each color rank except for Green are split into multiple stages. How units are promoted depends on the unit's rarity.

Units can be reset back to their original standing, except for rank, with all training resources and gear returned to the player. Units under Lv. 100 are reset for free; those at Lv. 100 and above charge 20 Gems for a reset. 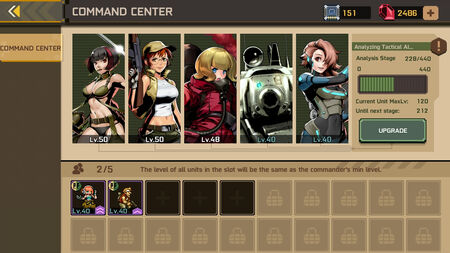 The player places secondary units as a means to conserve training resources for units they primarily deploy. The five highest leveled units are called Commanders. Units placed in the Command Center have their level temporarily raised to the lowest leveled commander regardless of their Military Rank but cannot be upgraded. Removing them from the Command Center reverts their level back to its original amount, and the slot they once occupied cannot be used again for 12 hours (or automatically by paying Gems). However, if the slotted unit leaves due to decommission, promotion, or becoming a commander, the slot does not go under cooldown.

The Command Center starts out with ten out of thirty slots available. New slots are unlocked by using Intelligent Chips.

Similar to the cranks in Metal Slug Attack, this is the main gacha component for recruiting random units. There are three types of recruitment centers. For the first two centers, the player earns a reward after drawing thirty units each, but they are limited to drawing five thousand (5,000) units per day.

If a repeating ★5 unit is drawn, the player earns a number of Faction Selection Cards. These cards randomly give out a ★5 unit of the faction selected.

A hidden variety store where the player uses their currencies to buy various items. Better items are sold as the player reaches stage milestones.

Also called the Ptolemy Arena, this is the main PVP game mode. The player battles against other players' defense teams controlled by an AI. A player is given a few free attempts per day with extra plays requiring Warrior Passes. They also have limited Combat Skips which automatically ends the match as either the victor or loser.

Each challenge starts with the player selecting a list of competitors at about 100 levels below and above the player's current standing. Selecting higher ranked competitors earns the player Gems for every one rank increased at the current ranking. Gems and Arena Coins are given daily and after every two-month season. All players' rankings and ranking prizes are reset per season. 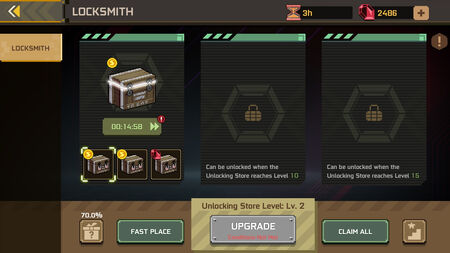 This mode is used to unlock Gold, Gem, EXP, and Merit crates earned through the main story and daily quests. Each unlocking table holds four chests with one chest being unlocked at a time. Higher level chests take longer to unlock. The player can speed up the progress by collecting Old Records, Fresh Beer, and Gold Watches to earn Speedup Time. This will automatically unlock the chest (or all of them) by the minutes remaining (seconds are rounded up).

When claiming unlocked chests, the Encounter Progress slowly fills up. Once complete, the player converses with one of four mysterious visitors. Each visit has a different situation with multiple dialogue choices. The rewards given depends on the visitor's reactions.

Chests also include Extension Tools that are used to upgrade the Unlocking Store. Leveling up increases chests rewards as well as unlocking the second and third tables at Lv. 10 and Lv. 15 respectively. The store is leveled up once the player collects a certain number of Extension Tools and clears the respective Campaign mission. 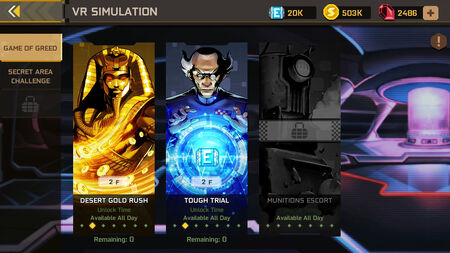 The player fights in various towers with their own set of rules.

The player fights against enemies with specific stats increased. New stages are available when campaign missions are cleared. The player is graded for clearing under a specific time limit and having all ally units survive. Clearing the stage perfectly once rewards the player with gems. These can be replayed or raided. All three subgames have their own daily attempt limit of three, and more attempts are earned by unlocking new stages. The limit resets at 18:00 UTC daily.

The player battles up to two hundred (200) stages from four locations each. These locations are available on specific days, and the player is restricted to using units from factions related to that location. Once a stage is cleared, it cannot be played again. Awards Gems, Assembly Orders, Unit Merit, Gold, EXP, Bronze Gears, and Faction R Coupons. 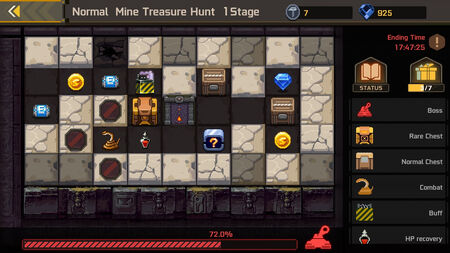 The player digs up a three-level mineshaft to collect Loot and Ore. There are three types of difficulties (Ordinary, Difficult, and Nightmare) with their own loot pile. The player can only go through one mine per day.

The player has a limited amount of pickaxes used to dig the 9x5 mineshaft. Pickaxes are used when a square is broken and are fully restored after a day reset or once reaching the next level. Only lit up squares can be dug up, and new squares are lit at cardinal directions from the currently dug square. Every time the player digs up a square, the Alert Level increases. Once the meter is complete, the boss door opens up. Defeating the boss gains access to the next level and rewards the player with Loot or upgrade material. The player can buy 10 more pickaxes for the current level for 100 Gems.

The player goes through the minefield with all owned units. However, units' standings stay put after combat: HP is not recovered and current Ultimate Skill meter is not depleted. Units knocked out cannot be deployed again until the player finds a Heart Crate, the day resets or the mine is fully cleared.

Digging a square may reveal something underneath: 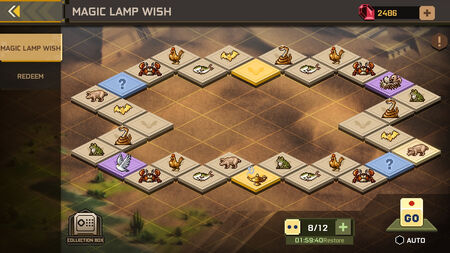 A large board table full of items. The player is given twelve dice and each die is restored every two hours or by spending 100 Gems. They move clockwise by the number rolled on the die. Each space has their own properties:

Cards collected can be redeemed for various rewards each requiring a specific set of cards. There are four tiers: Moon, Bronze, Silver, and Gold each unlocked by clearing their respective Campaign mission. Rewards barring the Lv. 1 chests have a purchase limit that are restored monthly at the Moon tier and permanently sold out at the latter three tiers. Some rewards at the Bronze, Silver, and Gold tiers require the player to purchase the corresponding tier medal first that is sold daily.

The player follows through a scenario that happened in lost time and space. The scenario is split into multiple events. Some events require the player to make a decision that leads to a different route. Tapping on Progress Rewind opens up a map with every route and event the player faces. After every combat, Hyakutaro gifts the player the option of buffs. All buffs stack until the scenario is finished. The scenario is considered complete once all routes are cleared and every reward is given.

Like in Mine Treasure Hunt, the player has access to all units that do not reset their standings after combat.

Title Screen as of Beta 3. 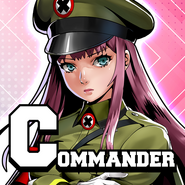