Metal Slug: Super Vehicle-001(メタルスラッグ-Metaru Suraggu) is a run and gun video game for the Neo-Geo console/arcade platform created by SNK. It was released in 1996 for the MVS arcade platform. The game is widely known for its sense of humor, extremely fluid hand-drawn animation, and fast-paced two-player action. It is the first title in the Metal Slug series.

The attacks could have been countered effectively, or even prevented, should the high-ranking officials have listened to the Regular Army's intelligence community, which had been warning about all sorts of indications that the Rebellion could attack at any moment in decisive force. Unfortunately, the same officials decide to save their own skins and announce that it was the intelligence failure that led to such catastrophe, which the personnel serving in the intelligence community did not appreciate whatsoever.

Meanwhile, Regular Army is pushed to near annihilation, with cities that it was supposed to be protecting in ruins.

General Morden makes an announcement that all of the major cities around the world will be under his control within 170 hours, also adding that any resistance would be futile.

The announcement certainly did not discourage a band of Regular Army soldiers attempt to salvage whatever they had left. Shortly after, a group named "Resistants" are formed by surviving members of the Regular Army and its researchers, who began to covertly convert the Metal Slug tank prototypes into combat-ready status in a hidden factory, hoping to launch a counter-offensive to regain what they had lost to the Rebellion. Morden just as quickly learns of this fact and attacks the plant, crushing the Resistants and capturing the tanks, putting an end to the counterattack even before it could begin. The vehicles are then scattered to prevent any ragtag Regular Army troops reclaiming them and using them to launch attacks.

Seeing the Regular Army panic and crumble, 1st Lieutenant Marco Rossi of the Regular Army Peregrine Falcons special forces unit quickly unites remaining Regular Army units and begins a commando operation to reclaim the tanks. Fighting alongside him is Second Lieutenant Tarma Roving from the same unit. Their main objectives were to engage the Rebellion and neutralize its leader, General Morden, while reclaiming the Metal Slug tanks to aid them in battles. If the tanks could not be recaptured, then they would have to destroy them to prevent them from being used by the Rebellion.

After various campaigns, the Regular Army defeats the Rebellion forces and reestablishes stability. General Morden is apprehended near the end of the conflict and is jailed in a maximum security military prison complex while awaiting trial for his war crimes.

The soldiers of the Peregrine Falcons squad were declared heroes by the Regular Army officials, with the lieutenants Marco and Tarma being credited with many awards. However, not everyone treated the P.F. squad as such because Regular Army officials had been discredited by their failure to prevent the Rebellion attack.

The player has to constantly shoot at a continual stream of enemies in order to reach the end of a level. At the end of each level, the player must confront a boss who is often considerably larger than regular enemies and takes multiple shots to defeat. On the way through the level, the player finds weapons upgrades and "Slug" vehicles that can be used not only as weapons but also as added defense.

The protagonists can perform melee attacks by using a knife and/or kicking. The player does not die for simply coming into contact with most enemies. Correspondingly, many of the enemy troops have melee attacks. Much of the game's scenery is destructible. Sometimes this reveals extra items or powerups, other times it simply results in collateral damage.

There are a total of six levels, with themes ranging from forests, garrisoned cities, snowy mountain valleys, canyons, and military bases.

The vast majority of enemies encountered in Metal Slug are enemy soldiers, who are given weaponry that fits their specific role. There also a host of mechanized enemies: tanks, mobile artillery, fixed-wing aircraft, armored personnel carriers and technicals. Much of the game's humor comes from how the enemies portray themselves. The player encounters them at many times of leisure: sunbathing, playing a Game Boy, roasting food over a fire, or just conversing amongst themselves.

SV-001: The title's namesake is the main vehicle found throughout the game. It can only be used by one player at a time. The Metal Slug features a ball-turreted rapid-firing Vulcan cannon that can fire in any direction. and a heavy main cannon. The main cannon uses ammo separate from grenades and other weapons, and is much more powerful. Hand grenades can still be hurled out of the vehicle. The vehicle can sustain three direct hits before destruction; health is restored by finding gas canisters. When vehicle health is completely depleted, the player has only seconds to vacate the vehicle before it explodes. The vehicle can also be used as a kamikaze weapon, which sends it on a suicide ramming attack as the player jumps out. In Mission 4 onward, the enemies can mount the tank and remove it's Vulcan cannon.

Later on, a Neo-Geo CD version of the game was introduced to help along with Neo-Geo's lagging sales, but it never caught on due to the lack of attention that the NGCD received.

Sega Saturn and Sony PlayStation versions were also ported and distributed. The Saturn version was available in two different versions, 1.002 and 1.005, the latter with minor bug fixes, and are no longer in production. The PlayStation version is currently being distributed by SNK Playmore as a re-release version.

In 2007, Metal Slug Anthology (known as Metal Slug Complete in Japan) was released for the Nintendo Wii, PlayStation 2 and PlayStation Portable. This compilation includes all the original Metal Slug games up to Metal Slug 6. The version of Metal Slug included is an emulation of the original Neo Geo AES release, with none of the additional game modes or content introduced in the other home versions. A downloadable version of this collection was made available on the PlayStation Store for PSP on October 1, 2009.

Metal Slug was also available on the now-defunct GameTap video game service, with a two-player online option. In 2008, it was released on the Wii's Virtual Console, and was also included as part of the SNK Arcade Classics Vol. 1 compilation for the Wii, PlayStation 2, and PSP.

An official emulated version of Metal Slug is also available on PSP and PlayStation 3, and in 2012, a wireless version was released for iOS and Android.

Metal Slug is also included as one of the 20 pre-loaded games on the Neo Geo X portable console.

There were plans to port Metal Slug to the Game Boy Advance (it was mentioned in the development section), however, as the official SNK website stated, "Due to the limited memory size of the GBA cartridge the plans for MS on GBA has been cancelled."

In 2006, according to a pamphlet being handed out at the Tokyo Game Show by SNK Playmore, a version of Metal Slug was being developed for the Xbox Live Arcade service. The text on the pamphlet translates to "the original". SNK Playmore did not list a release date in the pamphlet for the Metal Slug title.

Facing Morden for the first time

Soldiers jumping from a crumbling building

Bull Chan falling from the cliff 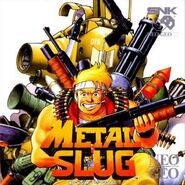 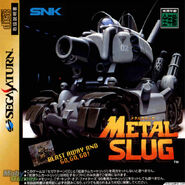 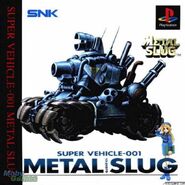 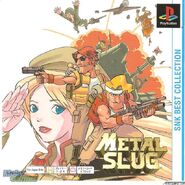