Metal Slug 2 (メタルスラッグ 2) is a run and gun video game for the Neo-Geo console/arcade platform created by SNK. It was released in 1998 for the MVS arcade platform and is the sequel to the popular Metal Slug: Super Vehicle-001. It is the second title in the Metal Slug series.

An improved version of the game, called Metal Slug X, reduces the original's notorious slowdown while adding new weapons and enemies into the series.

General Morden, the antagonist from the first game, is back once more with his army bent on taking over the world. It is up to the Peregrine Falcons Squad, who are now joined by two new characters: Eri Kasamoto and Fio Germi of the Sparrows Intelligence Unit, to save the day.

As the levels unfold, it turns out that Morden has allied with Martians to help facilitate his plans. In the final level of the game, the tables are turned when Morden comes under attack and is betrayed by his Martian allies and he is taken prisoner by them. An ad-hoc alliance is formed between the Peregrine Falcon Squad and the Rebel Army to combat the greater alien threat. After a long battle, they succeed in defeating the Martians' mothership, driving them off the Earth.

Alongside the SV-001, three new Slugs are introduced. Though just as susceptible to enemy fire as the SV-001, these vehicles provides alternate modes of transportation and advantages associated with each.

Metal Slug 2 is the first game in the series to provide characters to help the players in battle:

A revised version of Metal Slug 2, titled Metal Slug X, was released on March 1999 for the Neo Geo MVS. The game solves 80% of all the bugs, glitches and slowdown that Metal Slug 2 had. Metal Slug X introduces a few new elements to the Metal Slug 2 game system. New weapons and items are added, such as the Iron Lizard and Drop Shot. The enemy placement and bosses were re-arranged to increase the game's difficulty. Metal Slug X also added more food items in all missions, thus allowing the player to "go big" starting from Mission 3, not just be exclusive to Mission 4 like in Metal Slug 2. Most missions have their time of day changed.

Individual ports of Metal Slug 2 have been released for the Wii Virtual Console, mobile platforms (Android/iOS), and on Steam. The game is also part of the Arcade Archives series for PlayStation 4, Xbox One, Windows 10, and Nintendo Switch.

Hyakutaro helping against the missile towers

Facing the Arabians with the Camel Slug

Rumi sneaking in the tomb

Being pursued by a jet-ski

Using the Slug Flyer against the third boss

An infestation of crawlers in the sewers 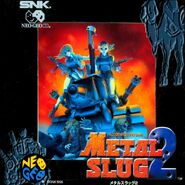