Playstation 2
Metal Slug (メタルスラッグ/Metaru Suraggu), also called Metal Slug 3D (メタルスラッグ3D) to distinguish it from the original Metal Slug, is a third-person shooter run and gun video game for the Sony PlayStation 2. It was developed and published by SNK Playmore.

It was released in Japan on June 29, 2006. It is the first game of the series to be presented in 3D. None of the original Metal Slug team were involved with the title.

The game had no definite title when it was first unveiled in Tokyo Game Show in 2004. In E3 of 2005, SNK Playmore revealed the game to be called "Metal Slug: Evolution", but was later changed to just "Metal Slug". Although only the Japanese version has been released, it contains menus that are mostly in English, as well as English voice acting. Japanese subtitles and dialogue are also available.

A North American version was planned to be released as "Metal Slug 2006" but it was cancelled. Instead, SNK released Metal Slug Anthology for PS2, PSP, and Wii in Japan, America, and Europe.

The world faces a time of chaos due to the waves of military invasions led by General Morden. So far, the dictator General "Devil Rebirth" Morden plots to conquer the world and instigates a series fierce battles by starting coups against the Government Forces, stealing its all-purpose vehicle Metal Slug. He even allied himself with unknown life forms.

But at every turn, thanks to the crack performance of four agents, the pride of the Government Forces, Morden's ambitions were shattered to pieces. Worn down by this series of defeats, the fighting power of Morden's Forces was reduced to mere remnants scattered throughout the world and holdouts in the city of their main base. Morden had been rendered militarily impotent.

But just when everyone in the Government Forces thought Morden neutralized, reports concerning the discovery of hidden Morden Forces from the Division of Intel comes racing across the wires. Word has it that a mid-sized detachment is concealed in a mountain village not too far from the Government Forces' main base. In response to this, GHQ judges the information to be highly credible and directs the special-ops unit Peregrine Falcons to take a second look.

Receiving their marching orders, Marco and Tarma quickly catch a ride on a transport helicopter and head for the site. Tarma optimistically views this as nothing more than another SNAFU. But Marco can't help feeling Morden is once again on the move, because his trigger finger is getting mighty itchy.

Metal Slug maintains many features from the 2D entries; characters use an arsenal of various guns, grenades and explosives, and vehicles. The game also introduces full three-dimensional movement to the series to coincide with its 3D presentation, which uses super deformed characters.

Upgrades and customization are some of the largest new features. Players can upgrade each character's combat abilities, categorized into Pellet, Power, Hit Rate, and Machine. These abilities allow characters to increase the damage, "splash" radius, and accuracy of their weapons and vehicle handling, respectively. Each character begins with a full proficiency in different categories. For example, Marco starts off with a full Hit Rate skill while Fio starts with a completely upgraded Pellet skill.

Another new feature is a grade system, which ranks the player according to their performance on each of the game's 11 levels. Achieving the highest rank, the S rank, allows the player to collect medals, which are used for upgrading character attributes.

Playing through the game also awards Skill Points to the player, which can be used to upgrade 4 other abilities, which affect the amount of damage a character can withstand, their ability to evade enemy attacks, and more.

The game also includes the option to customize the titular Metal Slug to their own liking, with the ability to switch out its "core", treads, weapons, and armor. An in-game laboratory can be used to build custom parts for the vehicle.

The four classic characters, Marco Rossi, Fio Germi, Tarma Roving, and Eri Kasamoto, are in the game, as well as their nemesis Donald Morden and Allen O'Neil. New faces include Kewald Oguma (pronounced "Ogma"), who is the president of the technologically leading company named "Oguma Enterprises".

Players are ranked in a mission based on score and time taken. As the player achieves the highest rank, the S rank, on each of the 11 missions, they will receive medals which will increase the respective characters' combat abilities. Reaching S Rank in all missions gives the 12th medal. The combat ability is broken down into four different categories: Pellet/Power/Hit Rate/Machine. There are four levels for these combat abilities. The higher the level, the more effective their skill becomes.

In the Garage, players will be able to access various sections, including Soldiers, Main Weapon, Sub Weapon, Slug Customize, Laboratory.

There are five different categories in which the player can modify the Metal Slug with: Core, Caterpillar, Cannon, Vulcan, and Armor. Parts are acquired by collecting CDs found in the missions and then using the required amount of materials to build it.

Core is the Slug's chassis. Each chassis is able to support different types of equipment.

Caterpillar is the Slug's treads.

Cannon is the Slug's primary weapon limited in ammunition.

Vulcan is the Slug's secondary weapon. They do not cause much damage as the primary weapon, but they do have unlimited ammunition.

Unless stated, all weapons have the ability to automatically track in on their target using the track button (R1) on the joypad.

Grenades are thrown by hand. Although their range is short, they offer better firepower than most side arms.

Upon completing the game once, the player receives the Monolith grenade as an unlockable.

The Slug Gunner is unlockable by obtaining all the required parts and assembling it. Removing one part reverts it to the SV-001. 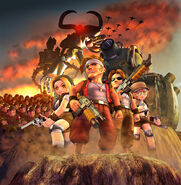