Nintendo DS
Metal Slug 7 (メタルスラッグ 7) is a run and gun video game by SNK Playmore for the Nintendo DS in the Metal Slug series. It was announced in the September 2007 issue of Famitsu and marks the first game in the main series that was released directly on consoles without an arcade version. The game was released in Japan on July 22, 2008 and North America on November 28, 2008 by Ignition Entertainment.

From the Metal Slug XX manual:

Thanks to the reconstruction proceeding at a miraculous pace, the scars of destruction to the thoroughly destroyed headquarters of the Regular Army and it's surrounding city were becoming less and less noticeable to the objective observer.

Just as people were beginning to recover a long-lost sense of vitality and order, a video transmission arrived at HQ from the Regular Army's Division of Intel. Discovered in a clip from a documentary on the waste disposal controversy was the brief flash of a figure appearing to be one of Morden's soldiers crossing the screen.

The Division of Intel had no doubts: this was indisputably a member of Morden's Forces. HQ swiftly organized a six-man covert strike force assigned with the following objectives: confirm the presence of Morden's Forces, and then eliminate them - with extreme prejudice! Marco, Tarma, Eri and Fio were quickly assembled as the initial members for this mission. Ralf and Clark, who had previously thrown in their lots with Marco and company, were also on board.

So began our heroes infiltration of Garbage Island, perhaps the final lair of Morden's Forces. And these forces were sharpening their swords, awaiting their arrival and preparing to pounce.

There are seven missions and three difficulties: Beginner, Normal and Hard. Unlike Metal Slug 6, choosing any difficulty does not lock the player from accessing the final mission. Clearing the game in Hard Mode changes the background for the Mission All Over screen.

Returning from Metal Slug 6 is the different player characteristics,Rush Blaster System, and Weapon Stock. Marco and Tarma are given additional special moves.

Metal Slug 7 uses the Nintendo DS touchscreen as a map of the level, making it easier for the player to look at it and know where to get power ups or captured prisoners. The game also introduces the Prisoner's List menu and the return of the Combat School mode which was originally featured in the console versions of Metal Slug, Metal Slug 2/X, and Metal Slug 6.

Below are the default controls for the game. Specific moves that require button combinations can be set to a singular button. The X Button, while not used by default, can have an action applied to it. Auto fire is available; it is off by default.

The game has the same set of characters from Metal Slug 6 with the same abilities as its predecessor. Moves in bold represent a character's Special Action done by pressing Up + Special + Primary Fire.

Alongside the returning SV-001, Slugnoid, and Slug Flyer, three new vehicles make their debut on this game:

A new weapon to the arsenal called the Thunder Shot fires a stream of electricity that homes and circles around enemies and vehicles.

Weapon ammo on Normal and Hard has been increased to match the previous games, no longer reducing the amount like in Metal Slug 6.

The first six missions have 14 POWs while the Final Mission has 16 POWs to rescue.

The songs in the game are composed by Toshikazu Tanaka after his work in Metal Slug 5. An official soundtrack of the game, titled Metal Slug 7 Original Soundtrack ~iTunes Limited Edition~, was released on the iTunes Store in Japan on August 8, 2008. A few tracks are remixed, such as "Assault Theme", "Final Attack", "Barracks", and a version of the Metal Slug 4 boss theme.

A revised version of the game, titled Metal Slug XX (メタルスラッグ XX), was released on December 23, 2009 in Japan and North America on February 23, 2010 by Atlus for the PlayStation Portable (and compatible with the PlayStation Vita). This version of the game features additional content including co-op multiplayer, multiple routes, a reworked Combat School, and Leona as a downloadable character.

A demo featuring the first two sections of Mission 1 was playable on Tokyo Game Show 2007. The demo has several differences compared to the final:

Running from a giant iron ball

Parachuting into the ruins 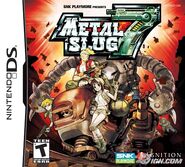