Metal Slug Advance is a run and gun video game for the Game Boy Advance handheld system created by SNK Playmore in 2004.

The special ops squad Peregrine Falcons (a.k.a., PF Squad) is known for demanding the best of its members in any situation to carry out the mission. A day in the corps does not go by without a vigorous regime of training. The mission this time is a simulated battle drill for new recruits. The stage for this drill is a remote island in the South Pacific. Walter and Tyra, two recent recruits in the Government's PF Squad, must land on this island with only a minimum of provisions. Once they make it off the island through their own devices, the drill will end successfully.

Naturally, the two have not been provided with any intel on the island's flora, fauna and geography, making it difficult to imagine what obstacles await them, and once they set foot on the island, there is no turning back. This may be just a drill, but one false step could be fatal. Will the two be able to weather the onslaught of ordeals and take their place among the elite and glory, or will they suffer ignominious defeat? The terrifying trial that will test their abilities to survive has begun.

Walter plunges into the heart of the island, spurred by the quickening throbbing of tension and excitement. Tyra follows, putting all her five senses at her keen disposal while prudently passing on. Just as the two disappear into the jungle, a sinister ship approaches! Little do the two new PF Squad recruits know, but their first drill is going to become their first taste of combat. The training unfolds under gathering clouds of war![1]

Gameplay in Metal Slug Advance is very similar to any other Metal Slug game. Two new systems, the life system and the card system, are present in this game.

The life system is simply a life bar for the players, as it replaces the extra lives and credits from all the other Metal Slug games. As players take damage, the life bar depletes (different attacks cause different amounts of damage). Collecting food items restore health. Players instantly die from being crushed or falling down a pit. Dying places the player to a previous checkpoint rather than on the spot, and any prisoners rescued and cards collected are lost.

The card system is the collection aspect of the game. There are 100 cards to collect. Cards can be found from shooting certain parts of the background, obtaining it from certain hostages, and sometimes by doing both. The cards have many different purposes, from giving detailed info on items and characters from the Metal Slug series, boosting player abilities, and even unlocking Slugs.

Metal Slug Advance has five missions. The first four are straightforward while the Final Mission has multiple routes. Collecting a special card in the Final Mission unlocks the Dungeon, a maze-like cave where twenty-five prisoners are present and certain cards clear once blocked paths in Mission 1 and Mission 3.

All weapons bar the Two Machine Guns return in this game albeit with their weapon ammo reduced in half. Collecting the respective weapon clip card will increase ammo count to its original amount.

Some cards affect gameplay once collected; others are optional modifiers.

The SV-001, the Slug Flyer, and the Slug Gunner (as an unlockable) make a return in the game. There are also two new unlockable Slugs which are simply modifications from those in the main series:

It must be noted that the Slug Mariner was planned for the game, as well as an underwater level, but was removed in the final product (although data for both still exist in its playable form).

Autofire is available; it is turned off by default.

Arriving at the island.

Rescuing a POW in the 1st mission.

Map of the island.

The Japanese are back! 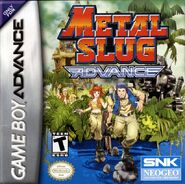 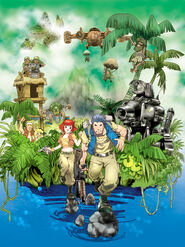 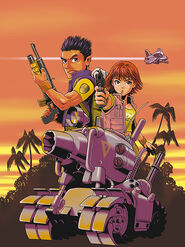 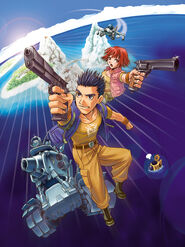 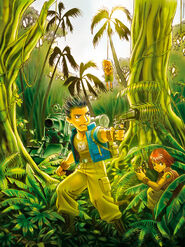