Not to be confused with the game with the same name.

A Metal Slug Attack (or Frontal Attack) is a suicide move that can be done with most Slugs. When in a pinch, the player is able to toss their Slug onto enemy groups. The player character jumps out of the Slug immediately and is given a bit of invulnerability.

There are different ways to perform a Metal Slug Attack, depending on the player's devices/platform.

Vehicle Slugs trample over enemy infantry with ease but crash at enemy vehicles, bosses, or a wall. Slugs such as the Slug Flyer or the Slug Mariner travel horizontally straight (or vertically for the Astro Slug) from where it has been tossed. If a Slug is still running around on-screen, it will eventually self-destruct within an invisible countdown timer.

The Slugnoids all hop up to the top of the screen. Slugnoids crash when hitting non-infantry on the air or by hitting the ground below as they fall. Special cases, such as the fights with the Aeshi Nero or the Hozmi, Slugnoids are able to pass through certain pieces of floor.

Animal Slugs trample over enemy infantry and through certain enemy vehicles. If they hit a wall or a hefty tank, they'll turn around and continue running.

A Metal Slug Attack cannot be done in this game as the destruction of the SV-000 sends the player to Prison Camp and likewise to a Slug Flyer leads to a Parachute Drop. Hilde Garn's Slug is able to perform an MSA multiple times without internal damage.

In this game, the player character jumps out at the very moment the SV-000 Proto 2 explodes rather than before the Slug starts its attack. A unique quirk of a SV-000 Proto 2 undergoing an MSA over a ledge is that it continues to move horizontally on thin air. This can be utilized to rescue POWs placed over long gaps.

A Metal Slug Attack can only be done with the SV-000 Proto 2 at the expense of accessing a different route. A destroyed Slug Flyer and Slug Sub either ends the mission (to a new route) or, if fighting a boss, causes a Game Over.

In Metal Slug 3D, the Slug will self-destruct while ramming any enemy infantry in its path until it hits a wall or enemy vehicle. This cannot be done with the Slug Flyer or the Slug Mariner as these are part of mandatory rail shooter sections.

An SV-001 undergoing a Metal Slug Attack is a special attack the player can periodically use on a whim when the MSA meter is filled. It travels from base to base, running over and automatically killing smaller infantry and crashing at heavier units. Those who are part of the collision are knocked back. The only way to dodge an MSA is to use an evasive attack or randomly use the evasion skill. A more powerful form called the Super Metal Slug Attack can be sent after spending twenty medals in the Relief Supplies Menu. It sends a SV-001 Type-R that deals three times the damage. In both games, it can be upgraded in the Customize Bases Menu to increase its damage dealt and decrease its charge speed.

In Metal Slug Attack, the MSA is a support system alongside the Reload Charge and Recovery Charge. Most CPU decks use the MSA support. After a certain update, the damage of the MSA was largely increased.

Some units (vehicular or living) undergo an MSA towards the closest, non-evading enemy unit should they be defeated. MS-Alice.ghost's main form of attack is sending various Slugs (including the Slug Gigant and Slug Attacker) in self-destruct mode.

After a Slug's gauge (the green meter) is depleted, they start to flash red and the word "TOUCH" appears above them. Clicking during this brief moment will activate their Metal Slug Attack. Ground vehicles ram towards the closest enemy, Animals trample the first enemy and turn away, and Aerial vehicles are dropped onto the ground either straight or at an arc.

Unable to do so in time will simply have the unit safely jump off by themselves before the Slug explodes or, for an Animal Slug, runs away. 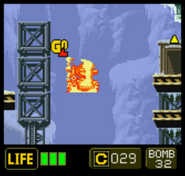 A Metal Slug Attack over a gap.