A sequel to this game, titled Metal Slug Attack, was released by SNK Playmore on February 2016[1].

Military intelligence finds that General Morden is alive, and planning another coup d'état.

The Rebel Army and aliens are revealed as behind the mysterious phenomenon happening around the world.

To stop the rebels and aliens from reaching their goals, military intelligence musters troops and dispatches them around the world.

General Morden and the aliens' lust for power pushed the world to the brink of destruction and chaos, only to be stopped at the last moment by the military.

But this does not mean that peace is at hand.

Could he have survived yet again?

If so, when and how will he attempt this next coup d'état?

The heroes struggle will not end. So long as there is a battle to be won on our world, they will be there.

The gameplay is a one vs one tower defense/strategy game, with two "sites" on either side of the stage where units are spawned. The main objective of the game is to destroy the opposing site by any means.

Once the game begins, forces begin accruing "AP", which is used to produce units that automatically advance toward the enemy's site. These units can either assault enemies, construct objects that impede enemies or support allied units, or produce additional units at no cost. Paying Rumi Aikawa a certain amount of AP will improve the rate that AP builds as well as the maximum AP that can be held at once.

After a sufficient length of time, a "Metal Slug Attack" (MSA) will be made available. Activating this will send a rapid-moving Metal Slug barreling toward the opposing side, exploding on impact. The MSA will run over (and instantly kill, regardless of amount of health) any light infantry, but will explode after running over ten units in a row. The MSA will also explode on impact with any vehicles or "heavier" infantry (includes Tar Men and Zombie Marco).

Two currencies are available: Metal Slug Points (MSP) and Medals. MSP is won from completing stages, and can be used to improve base qualities or increase unit health. REWARD-UPs can be used prior to starting a stage, and will increase MSP earnings by 50%, even after losing. Medals are premium currency, and are used to either purchase tools, swap for MSP, or purchase units from the store. Players have the option of buying Medals.

Similarly to all Metal Slug games, POWs can be found and freed and reward the player with certain benefits (albeit not in the same manner). Freeing one POW for each stage in a location usually activates a special ability that improves the player's fighting capabilities, such as reducing the cooldown time for units to be produced or increasing the MSP earned from completing a stage, with each subsequent POW rescued adding on greater benefits.

At each stage completion, a letter grade is assigned to the player based on how long he/she took to complete that stage (D, C, B, A, S, from lowest to highest). The faster the player completes the stage, the higher the letter grade, and the more bonus MSP is awarded.

EMERGENCY stages will occur at certain times of the day, and appear as red locations rather than blue. These stages are accessible for a one-hour time frame, after which they disappear. Rescuing all POWs (regardless of how long it took) awards the player with a unique unit, removes the accessible time frame (making it available at all times), and unlocks the subsequent EMERGENCY stage.

In the presence of Wi-Fi, the player can access "Wi-Fi VS", which pits the player against other human players in ranked matches. Players on iOS may also play matches against friends from the Game Center. Completing matches earns points to the player's name, and match outcomes are tallied on the Wi-Fi VS home page (though opponents will only be able to view number of wins). 3 Medals are awarded to the player for every 20,000 points accumulated, and a sum of 1,000 MSP is awarded for every loss incurred.

As of version 1.5.0 of the game, a new mode has been added where you can play 2-on-2 matches that includes a chat feature. Every 5 wins in this game mode will give you 3 Medals along with the 3 Medals obtained every 20,000 points accumulated in both modes (1-on-1 and 2-on-2). 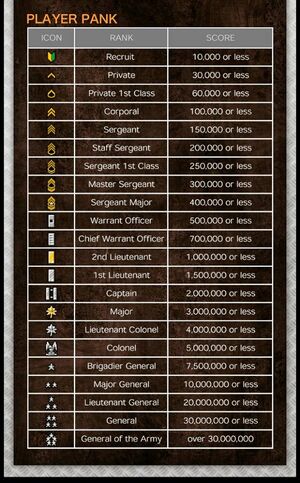 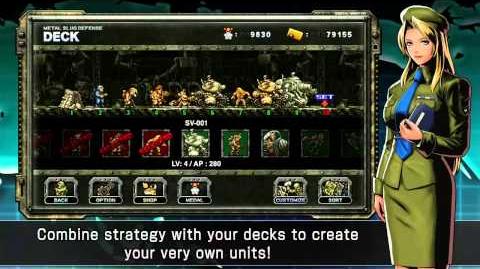